It has been a full week. Bad news, good news, reminders, everything. Before the frantic last few days until a certain event at the NEC why not have a smile?

National Terrier entries close today. There are a full set of classes with Challenge Cerificates for Glen of Imaal Terriers and the judge is Eileen Foy. Eileen, with her long connection to Glens, is a good excuse to recount a small tale just for the people who like “the good old days”.

Eileen was the first judge to give a Glen of Imaal a Best In Show and it was so unusual that the dog papers covered it. Tom, wheaten and a showman, had been shown under quite a few judges in the north of England so was quite well known. One of the judges who had awarded him a Best of Breed was Peter Bakewell (the Birmingham National judge this year) & he offered his congratulations when seeing the news and passed the comment that “surely he must about have a Junior Warrant by now”. The fast reply was no…Glens don’t get Junior Warrants. Back then rare breeds could obtain Junior Warrants but they were very unusual as 25 firsts had to be won before the dog was nineteen months old. On returning home, just for interest, the diary was consulted, Peter realised more about Tom than I did. Two more firsts and Tom became the first and only Glen of Imaal Terrier able to write JW after his name. 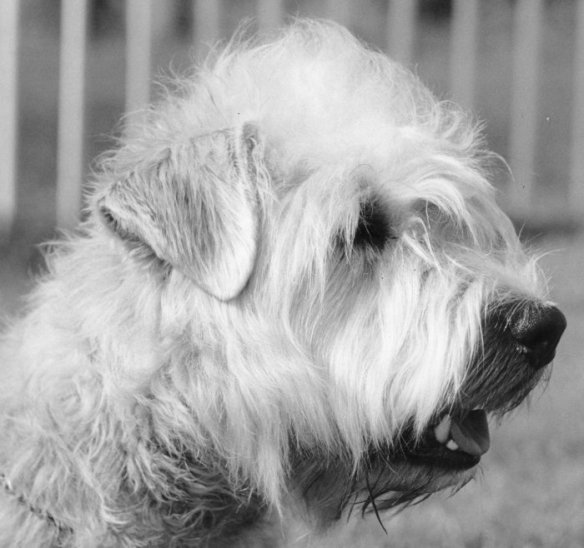 The Kennel Club and Sunset & Vine: Upscale apartments and designer shopping. An outstanding view from the roof. Sunset Boulevard…..or a television production company?

Of course the Kennel Club aren’t moving to the fabled West Coast of California but the television company isn’t a let down. Indeed Sunset and Vine, the new company to televise Crufts, is quite possibly one of the best things they could have done. The BBC has increasingly lost its focus in so many ways and is fast, in some areas, becoming virtually paralysed with political correctness. It didn’t know how to deal with Crufts (a great example being the silly boys & girls they insist should co-present) so really will be no loss. Sunset & Vine though know exactly what they do; they do sport and what else is our hobby? The US of A have acknowledged that for a long time with Westminster results appearing in the Sports pages so maybe, finally, the KC are getting something right. The following is from the website and who knows, maybe in a year or two Sunset & Vine might sell Crufts back to the BBC!

Sunset+Vine is the leading independent supplier of sports programming to broadcasters in the UK and a world leader in sports production and International Advertiser Supplied programming. The company produces over 2000 hours of sports television every year.

We extend our sympathies to Paul Eardley on the recent death of his mother Sheila. She regularly showed her dogs and could always be seen ringside until a severe stroke last July.  Her funeral is next Monday at 2.00pm. Paul will still be judging Glen of Imaal Terriers at Crufts the following Thursday.

Crufts will have a live webstream this year so everybody world wide, with access to the internet, will be able to see what is going on.

Crufts moves more into the 21st Century and so do we; the EFG is now on Twitter. We were the first Glen of Imaal Terrier group to have a blog and now the first to “tweet”. (That is what it is called when writing on Twitter. ) Facebook had been suggested but our Finnish sister EFG (Finland) is already on there, the first Glen Club to appear so they, like us, obviously lead, and also there is a strong Glen group so it is to be Twitter for us. We are there as glenofimaal so do say hello!

If any Glen of Imaal Terrier owner (or any breed owner come to that) is thinking getting their animals DNA profiled you need to get it done NOW as the Kennel Club are whapping up the price to £25.00 from next month. Yes of course the KC DO want dog people to do every health test going etc.etc. and this is the wonderful encouragement they give…..£10.00 added onto each and every procedure. Real joined up thinking!

The forms can be found on the Kennel Club website so get them downloaded, filled in and sent off in the next few days.

Westminster 2009 is into the history books now but the Glen of Imaal Terrier results must be mentioned here. This show is different from Crufts insofar as only the top 5 in each breed are actually invited to compete. This year it was Laura & Peg’s Dermot, Jo’s Rosie, Andy & Mary’s Riley, Colleen’s Finn & Jody’s Riley.

Congratulations to all and when viewing it do appreciate Dermot. It may be Westminster, he may have a handler but he is a Glen so if he wants to sit down he will. You can’t get a better example of “Glen-ness” than that!

A matter of a few hours and already comments and emails. It is very touching to know the blog was missed!

The photograph now resident at the top was taken in 1981 and to those of us around then it isn’t old. How can it be when we aren’t….well not on the inside anyway! Left to right the Glen of Imaal Terriers are:-

Pippa (Sammac Pippa Girl at Laureats). She was bred in Northern Ireland and was a cream. Are there any of that colour still around? The most recent that springs to mind was Dixie.

Bib (Eversley Beatrice at Laureats). Bred in Scotland and was brindle in colour.

Berg (Eversley Patrick) brother to Bib. He was a blue-brindle and led what is know commonly known as “the second coming”.

Carrie (Irish Champion Knockroe Shevaun). Bred in the South-West of Ireland and was a closet-grizzle.

Zac (Malsville Guitar Man). Bred in Wales and was red and white. On maturity his deep red wheaten coat with the contrasting nearly white head hair and feathering led many people in other breeds to very discreetly ask his owner just what did she put onto his coat to get that effect? Lyn would just smile and reply (quite honestly) “nature”.

Two weeks on and we are back! Would we have been missed? Would anybody have thought to send along things of interest or would it have been out of sight and out of mind? Glen of Imaal Terrier people haven’t been the only ones to pass along snippets for general consumption so muchas gracias and lets see what can be run with before the Crufts gossip really gets going. (Already some newspapers are sharpening the knives and, surprise, surprise, certain people are again involved. You have to admire her publicity machine if nothing else!)

By the way your eyes aren’t deceiving you. The blog does look different. After a year a slightly new layout and colour and it is a new photograph. Actually it is a very old one. At the end of 08 information was asked for about that picture and the comment was made, by somebody new to Glens, how nice it was to see “old Glens ” from the back of pedigrees.

Twelve months ago the idea came up of “would a blog work?” to advertise the EFG PRA Fundraising weekend. It was only going to be an occasional thing now and again but 220 posts later it is virtually daily and people complain when it isn’t there. (Much appreciated). Glen of Imaal Terriers, Kennel Club, general dog things, dog law, Crufts, whatever might be of interest has gone up. There won’t be anything new though for two weeks as the little red knotted hankie is packed and the holiday begins!