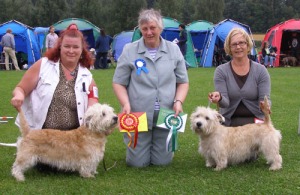 Only a few short weeks ago the unexpected death of Joe Welch was announced and now another one of us has gone; on Thursday Brenda Jones left the room. There are so few left that had Glen of Imaal Terriers in the late 70s and early 80s and Brenda’s passing, she had her first Glen in 1982, is felt very keenly. She came to Glens from American Cocker Spaniels & couldn’t believe how different it all was. A very formal Gundog life was quickly exchanged after her first show with a Glen. A well known Terrier man was the breed judge and he paused in the middle of going over her puppy to welcome her to Glens & the steward, on hearing the words of the judge, also told her what a great breed Glens were……the steward was Percy Whittaker. Brenda came out of the ring hooked.

Her favourite Glen was Bwyan and his over 50 Best of Breeds meant he obtained the accolade of being known by his first name to many in Terriers. The two of them adored each other and a bit of the heart went out of Brenda when he died; she believed there would never be a dog like him again and began to look more closely at Sealyhams and Cesky & had brilliant success in a short time with the Sealies.  She still loved Glens, owning a few oldies still, and had been really pleased to have been passed to award Challenge Certificates but unfortunately it is not to be.

We send sympathy and thoughts to her family and raise a glass to the memory of bonfires; singing and a dustbin.

Advance ticket booking is now available for Crufts 2010. Prices for Best In Show have an altered pricing structure.

Now, as the nights begin to draw in, is the time to think of something to do with your dog in the Winter. This could give you an idea or two but would a Glen of Imaal Terrier actually do it or just upend the entire tray?

Have a look at this, the latest idea from the Kennel Club. You can see the idea behind it but what about the other Groups? In your mind just run round the original function of some breeds…the mind positively boggles!