Westminster Dog Show in America is different from Crufts insofar as the entry is very limited. The only thing that can be guaranteed is that the top 5 in each breed will get an invitation to compete. In Glen of Imaal Terriers these are

The Kennel Club would like to assure people that the West Car Park at the NEC will be in use for Crufts even though it isn’t for LKA.

From the Irish Sporting Glen of Imaal Terrier Club:

The Irish glen of Imaal Sporting Club has been refused application for affiliation to the Irish Kennel club. The reason non so far despite contacting the kennel club 8 times in 2 week they still have not given us a reason for the refusal.  The glen of Imaal sporting club is the biggest Glen club in Ireland and is making great strides to ensure healthy dogs. We have a glen rescue centre for unwanted glens, A data base of Irish Glens to help members that want to breed, work out inbreeding % of the dogs so we can get it as low as possible to maintain strong dogs, and over 40 dogs DNA Tested for PRA in 4 years. We hold a field day and fun show every September and get 30 to 50 glens entered.   We applied for affiliation first in 2010 where we were told there would be a probation period of 3 years before full affiliation would be granted and we could carry on with our field days as normal until full affiliation was granted. We have not received any booklet with conditions or rules for  affiliation from the Irish kennel club. This means we have to guess our way through the year and what were supposed to do. Even on the web site if you were new to the breed there is no contact club for glens. (The Irish Glen of Imaal was a breed simply forgotten) not much is changing in the breed’s origin.

Crufts 2013 schedule is available. Terrier day is Thursday 7th March and Glen of Imaal Terriers are to be judged by Nick Hammond and will be second in Ring 2 in Hall 1. If you are downloading the schedule just be aware that it is a huge document of 144 pages, Glen classes etc. are on page 57.

Glen of Imaal Terrier people are still out and about. At the Amsterdam Winners Fear Fiuntair Crunchie Angus was Best of Breed and over in Ireland Ch Abberann Karl took a Group 3 at Cloghran. Pride of place though goes to Ch Rainbow Springs Kylee of Cnoc. At the front of her name is her exhibition title but she has just taken her Open Standard Agility title so this is now what follows behind (if there is enough room) CD, RN, RA, RE, NAP, OAP, NJP, NFP, OFP; nine “brain” titles to go with the beauty. Is Kylee the most titled multi tasking Glen?

The Kennel Club Question Time Event rolled into Leicester yesterday and, admittedly not the largest audience ever, five EFG badges could be seen so Glen of Imaal Terriers were very well represented indeed.

It has to be said, so it might as well be done on here, isn’t the whole idea to be elitist? Aren’t we all striving to show that we are at least one rung above others? Isn’t the whole idea to show that pedigree dog people who have attached their banner to the KC are proud of what they do and want to stand up and shout about it? It might be nice of the Clarges Street hierarchy to attempt the inclusive route but do their “customers” (me and you) really want that?

Liz Gay accepting the cheque from Robert Graves (Midland Counties) and Bonnie Scougall (Dog World) for the award winning EFG website. Can we improve even more for next year! 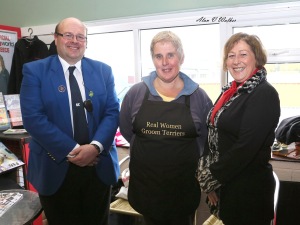