Glen of Imaal Terriers have been showing how rounded they still are as a breed.

From Mark Brown: Finnabair Winston O’Reilly RN, BN,CD, THD, TD, ETD and his handler Kelli became the first Glen team to earn a barnhunt title as well as earning a first place ribbon today in North Carolina.  Another Glen, Rainbow Springs Oliver Twist also earned a leg working with Monique Anthony.  For those not familiar with barn hunt, in the novice trial, the dog and handler must work in a simulated barn with stacked hay bales and hay bale tunnels and find hidden rats secured in a pvc tube.  There are 3 tubes but only one holds the rat.  The dog must indicate the correct tube which is then called by the handler.  The dog must also jump up on the hay bales and run a specified tunnel made of hay bales.  The dog has 2 minutes to indicate the tube and complete the exercises.  3 successful legs are required for a title. Any dog can play.  It’s Disney World for dogs. Oliver created some excitement when he disassembled the tube and the rat fell out (the rat is ok)!  For more information see barnhunt.com.

Also in America Monroe, Kylee and Daisy all qualified Intro to Quarry in Earthdog with Disy taking her first JE leg. In Finland Tampere International Show had Gleann Ungus MacGuire taking BOB and Gleann Ode Best Opposite whilst over in Ireland Ch Abberann karl was BOB and bailielands Leanbh Orga was Best Bitch. Congratulations to one and all!! 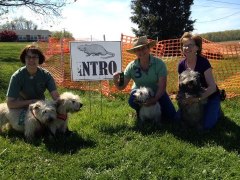