Glen of Imaal Terrier people are still enthusiastically out and about. In Finland at Porvoo Best of Breed was awarded to Rosears Finavia with BOS to Rosears Humpty Dumpty and at the Helsinki Group Show Rosears Heads or tails was Best of Breed. At the Irish Sporting Glen event an Overall Champion is awarded and this went to Bailielands Leanbh Orga who picked up Best Bitch, Reserve Best In Show and other points along the way from the various classes. Best Dog was Ballyclare Luke 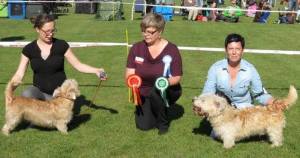 In America Laura and Ch Niamh of Cnoc go from strength to strength in the agility world. The AKC agility titles are earned by qualifying at events and Niamh, after a week of agility, has added three double Qs (qualifying 6 times out of 6).

In the UK Darlington Championship Show saw a very unusual event, a Glen was shortlisted in the adult Terrier Group. The breed was shortlisted in the Puppy group there only last year but can anybody remember when the last adult group was? Breed judge, Jeff Luscott, awarded Best of Breed to Johnny Be Good at Romainville with the words “what a performance!” and obviously Group Judge Andrew Hunt felt the same way. The Bitch CC at Darlington went to Jeonty MeMe Fern and Best Puppy was Amhard High Flyer.

Huge Congratulations to everybody!!!!!! 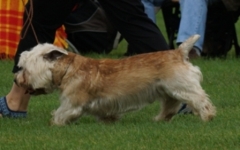