At a loss for something to do this weekend and in the Midlands? Try this.

Experienced dog owners of any breed, not just Glen of Imaal Terriers, do sometimes get a little complacent over certain things. New dog owners often really haven’t a clue so this guide from the Kennel Club is worth reading. It makes a good reminder for quite a few things that are toxic to dogs.

Always there is something that raises an eyebrow so let’s share an email “Okay, you’re the font of all knowledge. Have a dig in the back of the sideboard, if you still have it, and see if there is a trophy list anywhere because didn’t there used to be one at……..”.

Actually that email did more than raise an eyebrow; it made two go up. It also caused a slight cringe that “the sideboard” was known and things were, when looked, still in there nearly 25 years after the first Secretary of the Glen of Imaal Terrier Association said ten years was enough and it was time somebody else did it!

It also provided a trophy list from the 1980s but as to where things are now; maybe Anne, current Association secretary can help.

Crufts and National Terrier trophies are still known and are handed out each year. The Crufts trophy is normally given straight back!

There were 2 Tinkinswood Trophies, the Kirloe Donard Memorial Tankard, Farni Goblet, Shield and Inverary Tankard awarded at the Club Show.

Such memories evoked by that list which had been absolutely forgotten. People don’t seem to do (or want) trophies anymore but does anybody know where they are?

Admittedly (probably) the majority of us aren’t too affected by the school holidays by having the kiddies at home but many Glen of Imaal Terrier folk do have grandchildren. They also have nephews, nieces, the offspring of friends that might need taking out. If anybody knows of anything that might give a day out to the “rug rats” let us know and we’ll put it on here.

Glen of Imaal Terrier enthusiasts, followers and owners like to keep out there! At Leeds Championship Show judge Muriel Bailey paid homage to the thing we all know, Glens just get better as they get older, with both Challenge Certificates going to Veterans. It was a welcome to the Upper House as Donvaleset Rebus (subj. to KC confirmation) will now be adding CHAMPION to his name and Jeonty Lola May at Wickholm was awarded the bitch ticket. Gleann Dynamo Man at Jeonty was Best Puppy. The Veteran theme also continued over in Dublin with Abberann Conan, at 10, making a return to the ring to take BOB and his sister Ennya was Best Bitch.

There were three shows in Finland over the weekend and the Gleann affix was very much to the fore. Gleann Una Noonan was Best of Breed twice with Gleann Dynamite Mike taking number 3. The three “Opposites” were Gleann Ungus MacGuire, Rosears Humpty Dumpty and Gleann Curvy Corvette. Gleann may have been in two countries but so was Abberann as Abberann Torcan took a group 3 and group 4 respectively at Great Lakes All Terrier and Waukesha (Wisconsin) respectively. Daulton’s Emerald Green was also a double group placer over the weekend with two Owner Handler Group 3s in Ohio.

And what about the “brains” brigade? Mary Housholder’s Hannah took her first RATO leg and Monique sends the following….if there is room “Oliver had a great time at the NACSW Nose Work Element trial in Woodstock, CT on Saturday. He found all the birch scented hides in 4 separate vehicle searches and earned a Level 1 Vehicle element (L1V) title! It has been an embarrassment of riches lately and I’m so grateful that he still enjoys competing. There were also “brains” going on up in Washington State as Jeff writes “It was a busy weekend for Ciarán (Keadeen’s Blue Boy for Bluesette.)  He spent all day Saturday on a table greeting strangers and representing his breed in the “Celtic Kennels” at the Seattle Highland Games (in Enumclaw, Washington.)  Sunday, to unwind, he went rat hunting. Ciarán qualified in both morning and afternoon trials, earning his RATN title.  He finished with style, winning “high in class” on his second run

Millions of congratulations on a great weekend for the breed

Trimming (or not) is always a hot topic amongst Glen of Imaal Terrier people. Have a look at this for how things have changed with one of our cousins!

Don’t forget that Leeds Championship Show is this weekend. There are 14 Glen of Imaal Terriers entered for judge Muriel Bailey and Terrier Day is Sunday 26th. The breed is in first though at 9.30am so remember to set the alarm clocks!

I’m sure Glen of Imaal Terrier people, always generous, won’t mind that today’s round up begins with a new exhibitor. At Pembroke Canine Society Kingcottage Boogie On Basil got 2 firsts, Best NSC Puppy and Puppy Group 2.
Sligo (Ireland) had Ch Abberann Phelan topping the Glen entry with Ch Abberann Ennya Best Bitch.
In Finland it was their Glen Club Specialty and rather a good day for Kennel Gleann with Ungus MacGuire Best In Show, Rabarber Drom Best Opposite and Best Veteran and Best Puppy to Damn Daisy.
The Terrier Association of Oregon was a double BOB for Keadeen’s Blue Boy for Bluesette as he was top at Portland KC.
What a credit to the breed the American “Brains as well as Beauty” team are. Laura Trainor reports that Niamh has added Junior Earthdog to her numerous titles and Monique Anthony writes “Oliver had another enjoyable day at a Performance Scent Dogs trial. In Littleton, Massachusetts on Saturday he placed 3rd in the Novice Distance class, 1st in the Advanced Containers class, plus earned his third leg and consequently a TITLE in Novice Buildings! So many ribbons and so much Nosework fun!”
Many congratulations to all 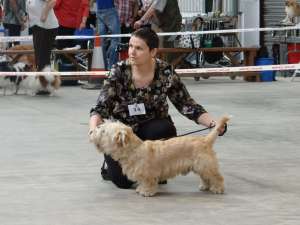 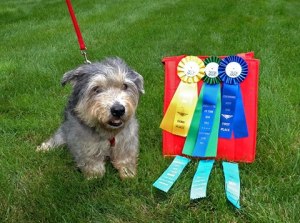 A few photos from the EFG Funday showing Glens were not the only exhibits even if they appeared everywhere. 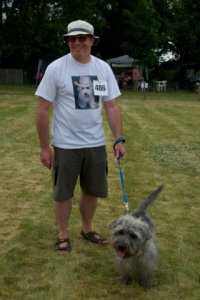