Some Glen of Imaal Terrier people have started travelling, some have arrived already and the majority have yet to start the journey to the NEC for the best day of the event; Terrier Day. Of course have a great trip whatever stage you are of the journey and we’ll see you there and hopefully, if you’re a super long distancer, it isn’t going too badly up to yet. It’s preaching to the converted of course but have you got the comfy shoes found? The headache tablets in the bag? The passes to get in? The map in the car in case roadworks overrun? and have you remembered to get (and set) a couple of alarm clocks for the 9.00am judging start? If you have promised to pay Jean (and Noel) your 2016 EFG (and GOITA) memberships please put the money in an envelope with your name on the outside-it saves a heap of money all rattling around together and then them getting home with a “whose was that?” cry.

There will be Schedules for the EFG Open Show available so if you can’t remember where you put yours from before Christmas…….also entries can be handed in (hint, hint). The EFG Open Show marks the 20th Year since beginning so it’s a bit special. Besides the monetary Specials there are one off trophies to be won and rather an excellent raffle prize for any Glen of Imaal Terrier owner or fancier. 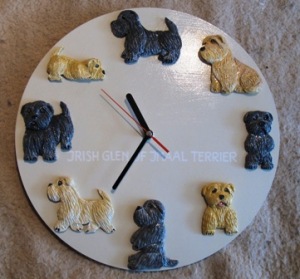 Of course we’d love to see you but you don’t have to actually be there to have a chance of owning this. The “limited” calendar was so successful this is to be a “limited” raffle. 52 playing cards will be available at £1 per card so if you’d like a chance of owning it just email jean (jean@e-f-g.co.uk) and tell her what card you would like, maybe the 10 of hearts is your lucky card. That card will then have your name on it and is then unavailable.

After the judging of the Open Show an unopened pack of cards will be handed to the judge to break open and pick a card out. That card will then be matched up to the name on the card in the named pack and the clock will be yours.

Remember as well that the EFG Open Show is held in conjunction with Birmingham Gundog & Terrier and this year they have allocated 10 classes for Glens with breed judge Tony Hadley. Two shows, two judges, one set of travelling costs, specials, prizes, how can you go wrong!

And don’t forget Sunday is BIRTHDAY CAKE day. 20 years of the EFG is to be celebrated with any and all friends of Glen of Imaal Terriers. As judging is so flippin’ early it’ll give plenty of time afterwards