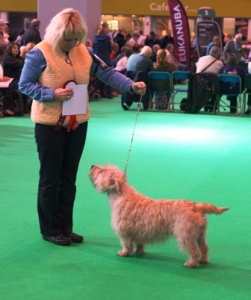 Crufts 2016 was the most international yet for Glen of Imaal Terriers and this photograph really shows it. An Irish bred bitch, resident in Finland, showing at Crufts with an American handler and taking a first prize!

First in the ring meant a very early start but there we all were bright and early, the only absentee being Scott Richards due to a bereavement in the family-our condolences, and prompt at 9 in we went. Judge Bill Brown-Cole was as decisive as always so by 11.00am the cake was being placed ready for the EFG 20th but more of that tomorrow because today is all about the exhibiting Glens.

The currently all conquering Billy Wizz took the Dog CC and Best of Breed with the Bitch ticket going to Finland with Tiina Assinen in the shape of Stiubhard Cutie Pie at Gleann. The two Reserves meant one really incredible day for Kathy George as Romainville Becks Blue and Romainville Rock On Ruby gave her kennel three out of four of the top awards!

2 thoughts on “How international!”