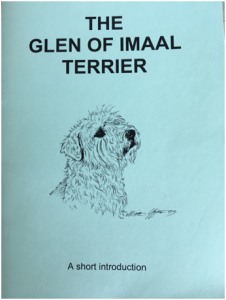 Once in a galaxy far, far away a Green Book was born. For many people it was their first introduction to anything written about the Glen of Imaal Terrier. Origin & History, Breed Standard, trimming, choosing a Glen, it was all there and it was very successful. It was freely available to anybody who wanted it because the whole idea was to get the genuine and authentic word out. It was a first in the breed and it was genuinely admired.

Times change though & so do ideas and wants. Everybody became obsessed with the internet & who wanted to read anything on paper? The Green Book acknowledged it was a relic of a time and disappeared into memory.

Retro is again popular though & some Glen folk have long memories. Why don’t you…… So we listened and it’s back. It’s get updated pages, it’s got health, it’s got appeal once more. Are you having a litter & need it for puppy packs? Do you want to send it to people who enquire about Glens? It’s here & it’s available for you. Just let us know.

We love that you are loving the return of a true icon. As it says above it is available  free of charge, it’s being looked on as a service to the breed just like it used to be, and it is for anybody interested in Glens. For folk who have already asked they will be coming out to you after the Bank Holiday weekend. Once you’ve got it a donation wouldn’ be refused if you think it worth it. If you decide you don’t want it offer it to your local library as they like books and leaflets that could be useful