so let us (as usual) start the new year with the Glen of Imaal Terriers “Of The Year” for the year just gone. Don’t show that sentence to any professors of the written word but hopefully it’ll be understood.

Finland is up first and the awards there (applause starting) are going to Gleann Cotton Cody and Top Puppy is Gleann Kooky Kanye. Keep it going for the UK and Abberann Conan-if a Veteran was done it would surely be him-and Jeonty Dreams A Dream with Karensbrae.

The USA “sort of” declares two. As the country is so big and there are so many (often small to European eyes) shows Top Dogs are declared from All Breed and Breed standings:-one deals with Group placings, Group wins and Best In Shows and the other deals with wins against their own breed. The official US listings are only completed to November at the moment so hopefully the finger and toe counting indulged in to work numbers out after the AKC Invitational are correct. If they aren’t sack cloth and ashes will be worn and twenty mea culpa said. It’s looking as if the American results are the same as last year with Finnabair Double D Friend of A Friend taking the number one All Breed slot and Kilkenny’s Across The Universe To Setanta the Breed slot. Considering Across The Universe took time out for a litter in 2018 that is quite a result! 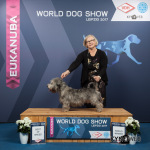 Kilkenny’s Across The Universe at Setanta