Lots of Glen of Imaal Terriers were out and about over the weekend but it just has to be a Veteran applause once more. At Welsh Kennel Club Brockland Brayhead Lad was Best of Breed but the Bitch Ticket went to (sister)Brockland Belle Bregorrey. Picking up the 3rd CC as a Veteran and after a later life litter just shows how fit our breed is in middle age. The two Reserves went to Romainville Bodhran and Romainville Tigan respectively so a double, double for breeders Ruth Welch and Kathy George.

Scandinavia saw a double in Sweden for SE UCH Abigail and at Heinola (Finland) Jeonty Flown Finnair took Best of Breed. Norway had the Oslo International and Best of Breed there was Gleann Uaid McDonald. In America Ch Niamh of Cnoc BN, RN, NAP, NJP showed her brains and beauty with a Group 1 in the Owner Handler terrier Group at SNKC and a Group 4 at Tioga Kennel Club. Many congratulations!! 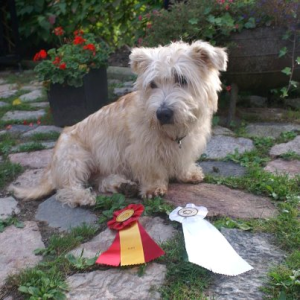