ut none of themGlen of Imaal Terrier folk like to think of themselves as family. Compared to so many breeds there are so few of us and however remote a place you are there will be somebody in the world who knows your Glen and its ancestors, will be able to recount stories of a sibling, show photographs of the grandparents. We share your grief when they take that final long walk and the joy that they gave you by being in your life. Whether a beloved companion who had never met another Glen and was only known to you and their breeder or one that appears on here every week and their success is read by hundreds, we are together. Occasionally though a Glen leaves here to join the eternal pack and more is required than just the pause in the day with “what a shame” and last week that occurred when Coleraine’s Mandalay Royalty closed her eyes to Bruce, Rob and Darby and opened them to Berg, Spike, Flynn and all who have gone before.

Her name was Curry, she was a showgirl, she began when very few judges considered the Glen of Imaal Terrier as anything else other than a support act but she quickly moved us onto centre stage. In 2010 she took Best of Breed, and one Best Opposite, at the Montgomery cluster. 2011 she went one better and took all four and was shortlisted in the Group at Hatboro 1, the first time a Glen had done the clean sweep.  Curry was the first Glen to take four consecutive group placements in one weekend and this was when Glens just didn’t get them and before the Owner Handler group came into being. September 2010 saw nine group placements on the trot and by June of the following year she had 27. The list could go on and on but she was more than just a list. She was a friend, she was adored and the breed honours the memory of one of OUR greatest ambassadors.

In America GCH Finnabair Song O’My Heart took a Group 3 at Clarksville KC and GCH Coleraine’s Mandalay Royalty, in a 3 day cluster, took 3 Group placements with the last one being a Gp 2 at Long Island KC. In Finland Gleann Nollaig was Best In Show at the Haijaa Group Show.

The big show of the past week was the World Show in Austria. World Winner was Ahadiel of the Beskyd Gate and Junior World Winner was McCormac Rathnait Kilraghts. Finally Finnabair Winston O’Reilley RN BN showed the brains of the Glen of Imaal Terrier with a new working title from an ASCA trial…and being Winston it is on his own blog.

What a set of results-congratulations everybody!!! 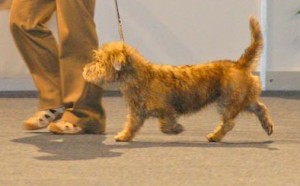 South Wales Kennel Association, judged by Peter Bakewell, saw Barney (Ch & Bel Ch Brockland Brayhead Lad) add to his CC & BOB total. Bitch CC went to Winni and as that was her third she can now be known as Champion Winnie Wanna Make Music By Jeonty. Whelped in April 2010 by Johnny Be Good at Romainville out of Jeonty Red Clover she is a first Champion for breeder Linda Samuel and the youngest KC Champion to date. The two Reserves were Jeonty Wanabee Bauer and Jeonty Maybe Daysee

Montgomery weekend was quite a weekend for Curry (GCH Coleraine’s Mandalay Royalty) as she took Best of Breed at all four shows, the first time there has  been a clean sweep in Glen of Imaal Terriers at that event. Fergus (GCH Cill Dara’s Fergus of Daulton) was Best Opposite at Hatboro 1 & 2 and Montgomery. Devon saw newly crowned Champion Finnabair Ardmore Ned (Ch Malsville Soldier Blue/GCH Finnabair Fiona The Wicked) take Best Opposite. A great weekend and many congratulations to all

The BIG weekend of shows in the USA, as far as Terrier people are concerned, is the cluster now on in Pennsylvania which culminates Sunday with Montgomery. Hatboro 1 has already happened with the Glen of Imaal Terrier Best of Breed and shortlisting in the Group for Curry-GCH Coleraines Mandalay Royalty- and Best Opposite to Fergus-GCH Cill Dara’s Fergus of Daulton.

Montgomery is one of those events that pulls people from all over the world so if you need to talk to a Terrier person this weekend they may not be available. 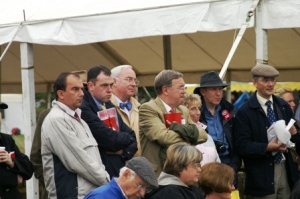 A group of spectators at Montgomery

Over in America G.Ch Coleraine Mandalay Royalty added another first to her increasing portfolio. Curry became the first Glen of Imaal Terrier to take four consecutive Group placements in one weekend. Two Group 4, one Group 2 and then finished the weekend with a terrier Group First. She now has 27 Group Placements; is she the Glen with the most in the world?

Down in Florida Ch Finnabair Song O’My Heart also added to the breed profile with a Group 4.

Many congratulations to both.

Finland had a double CACIB in Helsinki. 22 Glen of Imaal Terriers were entered on the Saturday for Ann Ingram and Best of Breed went to Taramont Iubdan with Gleann Ode being awarded Best Bitch. Aberann Fagan won another CAC

Over in America Coleraine Mandalay Royalty took a Group 2 to follow on from a Group 4 of last week, this takes Curry to an incredible 23 Group placings

The Westminster circus began with holding of The Associated Specialties (specialties in over 30 breeds) plus three Group shows for Sporting, Hounds, and for the first time on Westminster weekend, Terriers. The Best of Breed Glen of Imaal Terrier G Ch Coleraine’s Mandalay Royalty did the breed seriously proud with a Group 4 in such high level competition.

Are Open Show results okay? Of course they are but don’t forget to send them. At West Midlands Terrier Best of Breed Glen was Johnny Be Good at Romainville under judge Jason Atkin.

…what has been going on over the weekend in the Glen of Imaal Terrier world?

A BIG weekend in Finland with the Helsinki Winners & the Finnish Winners. Best of Breed both days was Gleann Nollaig & the BOS was also a repeat with Gleann Queen Size Girl. Indeed all the major awards were repeated!! In America the race is on for the end of the year rankings and Gettysburg was the “biggie” of the weekend…with Terrier Group 2 going to a Glen of Imaal. Gr Ch Coleraine’s Mandalay Royalty added number 19 to her group placement tally!

The National Dog Show in America has just taken place with nice coverage of the Glen of Imaal Terrier Best of Breed, Gr Ch Coleraines Mandalay Royalty and also a shot of the breed (picture 30) on the nbcsport channel.

The National is held on Thanksgiving which means the end of the year is approaching so it seems a good opportunity to say that the daily coverage of the Glen (and wider) world is also coming to an end FOR THE YEAR. The winter isn’t the easiest time for dog people and once the various end of year “Winners Shows” are over all serious exhibition people will be stripping their Glens out for Westminster, Crufts etc so as they go into semi-hibernation so are we. There will be news and everything on here but nothing like the daily release that there has been for the past two years….until probably February when coats have grown and entry figures for the Spring Shows start arriving.

2011 will see the first FUNdraiser since the discovery of the Adam9 gene mutation. Some will think that the journey is over now but it isn’t as the EFG pledged to match the money and they will! Mr Jeff Luscott will be judging the Companion Show and there will be eye testing by Professor Peter Bedford. All the information will be on here as usual along with anything else that is sent. The EFG blog-keeping Glen of Imaal people up to date the same as always.

A warm congratulations are extended to all the Glen of Imaal Terrier Winners in America, Slovenia, the UK and anywhere else that didn’t send their results!

In the States the Terrier Club of Michigan Cluster is the last big Terrier event before Montgomery and entries are always good. Best of Breed on all three days was Gr. Ch. Coleraine’s Mandalay Royalty who was short-listed in the group on two days and was pulled in Group 2 on the third.

Darlington had Ir Ch Abberann Eilish at Kirikee get the nod for Best of Breed from Amhard Freebooter.