People & glens from all over the country converged on Swinehead for the EFG funday on Saturday – some of them won’t be home yet and more pictures will be up as they come in.

The weather gods smiled and ten Glens turned up in the special Glen class.

Glen of Imaal Terrier folk; you have to love them for their dedication. At the International Show at Tvaaker (Sweden) McCormac Setna Sithbacc was BOB with Bilbo’s Roisin Best Opposite and now a Swedish Champion. In Finland Stiubhard Cutie Pie at Gleann led the way with Pearytail Batman at Gleann Best Dog. Ireland and Irish Ladies All Breed Show had Ch Abberann Phelan get the nod for BOB with his sister Dervla Best Bitch.

Over in America a busy weekend: At Woodstock Dog Club BOB was awarded to GCH Daulton’s Emerald Green with Kilkenny’s Granite Great Gatsby Best Opposite. Astabula and Grand River saw a double for GCH Emerald Isle Keely with Daulton and also two Owner Handler Group placements. Green Mountain was a nod to the big ribbon for Kilkenny’s Granite Glen Rooney and Brookhaven KC had GCH Rainbow Spring’s Wicklow Warrior of Ber-D-Mar take BOB and Group 2 with Ch Ber-D-Mar My Dream of You Aoife taking Best Bitch. At the second Brookhaven Show Aoife was again BOS to Cormac McCarthy’s BOB.

Bath Championship Show was rather wet but Glen of Imaal Terrier people were there. Best of Breed, and his 20th CC, was Int Ch Brockland Brayhead Lad with the Bitch CC going to Bregorrey Lady Belleisle. A cluster of shows in Ohio saw 4 Best of Breeds for GCH Finnabair Ardmore Ned plus a Group 4 and 2 Group 3s. Three times his Best Opposite was CH Emerald Isle Sweet Molly Malone with Daulton and once GCH Daulton Emerald Green. Daulton’s Dark Lily of Caradoc was Best Puppy and also nodded into the number 2 slot in the Puppy Group. In the States and owner handled Group is also scheduled (due to the number of professional handlers) and Glens placed in that Group on two days; a group 3 for Paddington of Tipperary and a group 4 for GCH Liberty’s Darren of Daulton.

Ber-D-Mar Ballygriffin of Greystone, not yet 12 months old, finished his Beginners Novice Obedience title and obtained 2 legs towards his Rally Novice Title. Fabulously well done to griffin and “not bad at all” to the other winners over the weekend!!!

Late October but Glen of Imaal Terrier folk are still out and about. At the two weekend shows at the Delaware Ohio Kennel Club GCH Daulton’s Emerald Green was BOB on both days. In Finland Lahti Gleann Una Noonan was BOB with Rosears Humpty Dumpty BOS. Midland Counties saw Brockland Brayhead Lad get the nod for BOB with Romainville Jean Genie BOS. 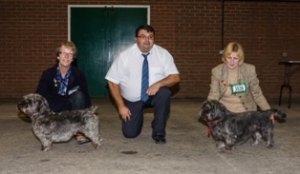 Not the usual photo but an action shot of the Best Puppy (Romainville Call Me Ace) at Midland Counties.