The American Kennel Club, with Westminster being quite small, invite the Top 5 in each breed on October 31st of the previous year to compete. Glen of Imaal Terrier invitations will be going to

An interesting selection for judge Ron Menaker and others may get through of course.

As it is now October the three-quarter leaders have been announced by the various papers and magazines that run the contests. In the UK Romainville Billy Whizz is Top Glen of Imaal Terrier. Top Stud dog is Jeonty Wannabe Buster and Top Puppy Gleann Dynamo Man at Jeonty. Top Brood Bitch has no clear leader whilst Top Breeder is Romainville.

In America Daulton’s Emerald Green is 9 month leader with Canine Chronicles and Dog News has Finnabair Ardmore Ned. If anyone else would like to send their countries results we’ll put them up with pleasure!

Glen of Imaal Terrier enthusiasts, followers and owners like to keep out there! At Leeds Championship Show judge Muriel Bailey paid homage to the thing we all know, Glens just get better as they get older, with both Challenge Certificates going to Veterans. It was a welcome to the Upper House as Donvaleset Rebus (subj. to KC confirmation) will now be adding CHAMPION to his name and Jeonty Lola May at Wickholm was awarded the bitch ticket. Gleann Dynamo Man at Jeonty was Best Puppy. The Veteran theme also continued over in Dublin with Abberann Conan, at 10, making a return to the ring to take BOB and his sister Ennya was Best Bitch.

There were three shows in Finland over the weekend and the Gleann affix was very much to the fore. Gleann Una Noonan was Best of Breed twice with Gleann Dynamite Mike taking number 3. The three “Opposites” were Gleann Ungus MacGuire, Rosears Humpty Dumpty and Gleann Curvy Corvette. Gleann may have been in two countries but so was Abberann as Abberann Torcan took a group 3 and group 4 respectively at Great Lakes All Terrier and Waukesha (Wisconsin) respectively. Daulton’s Emerald Green was also a double group placer over the weekend with two Owner Handler Group 3s in Ohio.

And what about the “brains” brigade? Mary Housholder’s Hannah took her first RATO leg and Monique sends the following….if there is room “Oliver had a great time at the NACSW Nose Work Element trial in Woodstock, CT on Saturday. He found all the birch scented hides in 4 separate vehicle searches and earned a Level 1 Vehicle element (L1V) title! It has been an embarrassment of riches lately and I’m so grateful that he still enjoys competing. There were also “brains” going on up in Washington State as Jeff writes “It was a busy weekend for Ciarán (Keadeen’s Blue Boy for Bluesette.)  He spent all day Saturday on a table greeting strangers and representing his breed in the “Celtic Kennels” at the Seattle Highland Games (in Enumclaw, Washington.)  Sunday, to unwind, he went rat hunting. Ciarán qualified in both morning and afternoon trials, earning his RATN title.  He finished with style, winning “high in class” on his second run

Millions of congratulations on a great weekend for the breed 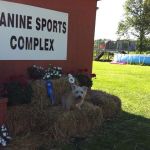 …here in the UK a new Glen of Imaal Terrier joined the ranks of the Upper House when Bregorrey Lady Belleisle took the Bitch CC at Bath Championship Show under judge Ronnie Irving. She had to bow the paw to the (previous) latest Champion Romainville Billy Whizz who took the CC and BOB but I’m sure it wasn’t minded. The two Reserves were Romainville Rock On Ruby and Golden Spurs. Best Puppy was awarded to Amhard Jessie Jay 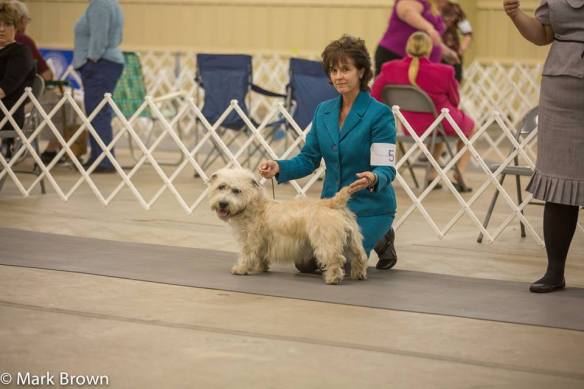 did his brains and beauty routine very successfully at Walton Beach with a Qualifier in Rally Excellent and a Group 4 in owner Handled.

Birmingham National saw a new Glen of Imaal Terrier Champion when Romainville Billy Whizz took ticket number three and Best of Breed under Harry O’Donoghue. Abberann Dervla was awarded the Bitch Ticket with Abberann Phelan and Romainville Annabelle taking the respective Reserves. Annabelle was also Best Puppy with Donvaleset Rebus getting the nod for Best Veteran. Travelling award goes to the Whites who promptly turned around from Stafford to head to Newtonards where Phelan was BOb with Dervla BOS.

At Lahti Puppy Show in Finland Gleann Dynamite Mike was Group 2 and at the 2 day Ravenna Kennel Club Show in America GCH Daulton’s Emerald Green was BOB both days and also took a Group 4.

Glen of Imaal Terriers (and their folk) like getting out and about. In Finland at Turkuu International Best of Breed was Gleann Una Noonan with Rosears Humpty Dumpty getting the nod for Best Opposite. SKK International Show at Malmo saw McCormac Setna Sithbacc take the big rosette and in Germany Fire & Ice Lady Killer was top of the heap at Hamm.

Over in the States GCH Daulton’s Emerald Green had three Best of Breeds at Columbia, Greater Monroe and Fayetteville with a Group 4 & 3 Owner Handler at the latter two. The biggest applause has to be for Gerrardstown Maiden Fair who added RATI to the rear of her name at eleven and a half years young!

Glen of Imaal Terriers (and their people) are well out & about even though it isn’t Spring yet.

A report from Seattle and news of a difference- the Glen Meet The Breed Booth got an award of merit! The ring awards went to Keadeen’s Blue Boy for Bluesette and Keadeen’s Sir Emmet Mingus Glas with a Best of Breed each. The four day Kentucky Cluster had 2 BOBs & 2BOS for GCH Abberann Torcan and the same for GCH Daulton’s Emerald Green in nice entries. At Everglades Terrier the top awards were shared between GCH Kilkenny’s Sullivan of Castlerock & Glentyrs Lady Isabella at Castlerock.

At the Celtic Winners in Dublin BOB was Ch Abberann Phelan with Daulton’s Midnight Sky of Galore Best Bitch and a new Glen to honours with Stiubhard Dobbie taking the Res GS. A little brag from Nick-but we quite understand-on what a family day it was with daughter Susan taking Gp4 with her Maltese and son Colm BOB with his Rottie!

We love Glens with titles at both end of their name and after a Barn Hunting Weekend Laura Trainor reports that Niamh finished in Open with a Qualifier in her first Senior and Kylee had 2 Open Q’s!

In America the Montgomery cluster is the big weekend of the year for all Terrier people, not just Glen of Imaal Terrier folk, and they were out in big numbers. Hatboro 1 starts it all off and it was BOB for Ch Abberann Torcan, BOS GCH Daulton’s Emerald Green with Best Winners for Ber-D-Mar My Dream of You Aoife. Hatboro 2 saw GCH Finnabair Ardmore Ned as BOB, his sister GCH Finnabair Song O’My Heart stood opposite him with Finnabair Song Of The Border as BOW. Devon saw Torcan again triumphant with GCH Emerald Isle Keely with Daulton Best Opposite & Ber-D-Mar Charm One of Wicklow getting Best Opposite. Montgomery is the biggie and it went to the veteran GCH Daulton’s Emerald Green, the first BOB handled by the owner, with GCH Finnabair Ardmore Ned taking Best Dog and Ber-D-Mar Charm One of Wicklow taking Best of Winners again. There are also various agility and working trials held around the weekend and Laura Trainor’s Niamh got a double double qualifier in Agility and then took her RATN (Barn Hunt title) along with kennel mate Kylee. Peg Carty’s Gem & Dorie qualified RATI.

At Zwolle in the Netherland Madrad Athas Aingael Alva Solais took BOB and in Finland Glenrosedale Aoibhean Nion Ros was BOB at the Tuulos Group Show. It’s not often results come in from Russia, at Pskov Marfidal Cream Tea was Best of Breed and became a Russian Champion

High summer and Glen of Imaal Terrier people were out and about with a vengeance!!!!

At a cluster in Ohio Ch Emerald Isle Sweet Molly Malone with Daulton took 3xBOB and 1xGroup 4. During the same cluster Paddington for Tipperary got his final points to add Champion to his name. In Mississippi GCH Finnabair Ardmore Ned took three Group placements including a Gp 1. Incredibly GCH Rainbow Springs Wicklow’s Warrior of Ber-De-Mar was also getting the nod to take the top spot in the Group in Virginia…is this the first time two Glens have taken that spot on the same day? At a cluster in Vermont GCH Daulton’s Emerald Green got Best of Breed twice and GCH Abberann Abaigael once.

At the Danish Terrier Club Show a new Champion was crowned in McCormac Setna Sithbac when he took Best of Breed. In the UK the Funday saw the blessing of the Sun God and people turned out to worship him via an excellent entry! Many congratulations to each and everyone and if there were any more shows that need sharing………

Glen of Imaal Terrier people were certainly out and about over the last weekend. A different result at Scottish Kennel Club with both the Dog CC and Reserve CC going to puppies rather than fully mature dogs-that is a critique is being awaited with interest. Congratulations to Abberann Phelan (Dog CC & BOB), Romainville Jazzman(Res Dog CC), Romainville Uptown Girl (Bitch CC) and Ch Abberann Ennya (Reserve Bitch CC). In Ireland BOB at Hibernian was Poachersmoon Sissy McGinty whilst in Finland Glenrosedale Ardal Ridire Ain Ri was BOB at Joensuu and Rosears High-Five was BOB, and became a new Champion- at Rauma.

In the USA two Group placements were recorded over the weekend: GCH Daulton’s Emerald Green was BOB and Group 3 in Terrier Owner Handled at Blennerhassett and Glentyrs Lady Isabelle at Castlerock was Group 4 at Greater Kingsport. In Holland the Dutch Glen Association had a very successful Puppy, Junior, Offspring & Veterans Day and at Ustka (Poland) Firhir Glen Limited Edition took BOB.

Well done to everybody!!!