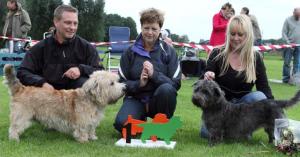 Although the weather forecast wasn’t too good for Saturday 17th September, rain and thunder was expected, we kept it dry and even had good conditions during our annual outdoor Championship Clubmatch. 30 Glens, mainly from Holland but also from Germany and Belgium were judged by Mrs. Elly Weijenborg-Weggemans. Not an easy job as the contestants were all in top condition.

Over in America back to back Shows at the Clermont County Kennel Club saw Grand Champion Coleraine’s Mandalay Royalty take Best of Breed both days and unbelieveably she also took Gp 3 both days as well. This follows on from a Group 1 last week and gives her nine group placings on the trot-will any Glen of Imaal Terrier in the world ever beat this?

Ireland had an International Show on the Saturday and Best of Breed was awarded to Jun Ch Torcan of Carrighglen with Best Opposite going to Ch Abberann Ennya. Reserve Dog was awarded to Int Ch Abberann Conan. The Sunday was the Club Show of the Irish Sporting Glen Club (their first since recognition) and it was a great day with lots of sunshine and lots of Glens. Best In Show was Jun Ch Torcan of Carrighglen (great weekend for the O’Tooles) with Best Bitch going to Ballyclare Sky Blue. The Sporting Club prides itself on dealing with the “total Glen” so also has an obedience competition with Garrighglen Big Boy being declared the winner. There were other competitions throughout the day and at the end an overall winner on points from ALL disciplines is declared; novice winner was to Cilleoghanin Beibhinn and open winner Ravencroft Monty.

The Dutch Glen of Imaal Terrier Association held its Championship Show and there, also in great sunshine, Best In Show was awarded to the Best Bitch Fear Funtair Bwreena with the Best Dog being Billy Tow von Au Diech. The two Reserves were Trenkie El’s Eversley Eireannah and Fiddlers Green Barney McKenna

As well as the shows there were two DNA clinics held over the weekend so Glen of Imaal Terriers, and their people, were rather busy!