Many parts of the world have been recording very high temperatures but Glen of Imaal Terrier folk obviously thrive on the heat.

For a change let’s start the round up in Canada. Not a big dog showing country but boy do they like Glens with Gleann Holy Hannah taking 2 x Group 1, 2x Group 2 and 2x Reserve Best In Show and Finnabair Double D Friend of A Friend taking the full set in Groups, one, two, three and four all on the same weekend!

In Ireland Poachersmoon Sissy McGinty was Best of Breed and at the EFG Fun Day (another event that was hot, hot, hot) a Dachshund was Best In Show and the Glen (who was on holiday from Germany) was Reserve Best In Show. By the weekend of Leeds Championship Show the weather had become wet, wet, wet but that didn’t stop Golden Spurs (Best Dog) and kennel mate Sigrid Helga at Pantcottage taking Best of Breed. The two Reserves to Boudivella Osca and Jeonty Dreams A Dream at Karensbrae.

At Grand River Kennel Club Finnabair Shorlyne Caatskill Comedy tonight was Best of Breed (and G4) with Tipperary Ballyfinboy Liam of Cnoc again Best Opposite that was the icing on his Best of Winners at Ashtabula KC on the 12th July as that was the final points for his American Championship. Caoimhe is really on song at the moment as BOB was also taken (twice) at Dan Emmett KC along with an OHG4 as well as two Best of Breeds at Western Reserve KC where a G4 and an OHG3 were collected as well. The two Best Opposites were Daulton’s Gedunk Malone from Emerald Isle and Daulton’s Sailor John of Roseglen. Marion (Ohio) KC also fell to her with Ciaran Best Dog again

Continuing in the States a new star arose at Terrier Association Of Oregon when Keadeen’s Happy Chance-at just under a year old-was nodded to for Best of Breed and then he took OHG1 and Group 4. Best Botch was Keadeen’s Second Star To The Right. The back to back shows at Portland Kennel Club saw Keadeen’s Second Star To The Right triumph at both with Keadeen’s Sir Emmet Mingus Glas and Keadeen’s Happy Go Lucky the Best Opposites. Another young star has also emerged further down the country at Woodstock Dog Club when 7 months old Kilkenny’s Stopping By Woods was Best Opposite and PG3 to his mother Kilkenny’s Granite Glen Rooney. This was again repeated at Green Mountain whilst at Green Mountain second show Rooney took the honours again with Ballyhae’s Winter Sunshine taking Best Opposite.

First time results from the Split 4 Day Summer Show with some very handsome rosettes, and her Croatian Championship, lifted by Pearytail Bonnie B Goode. Pori International was a Best of Breed for Gleann Ungus MacGuire with Balloo Girl Best Bitch. Ohio saw a four day cluster and results are in for three. Finnabair Double D Friend of a Friend featured on all days with 2 Best of Breeds and a Best Opposite and Tipperary American Girl taking one Best of Breed and one Best Opposite with an OHG2 & OHG4. Daulton’s Caoimhe of Pine Meadow took the other Best Opposite and also a OHG3. At Hurricane Ridge Kennel Club Keadeen Sir Emmet Mingus Glas took a Group 1 & 4 as well as 2 owner handler Group1s and an OHRBIS so a nice weekend there!

Monique Anthony sends “Ginny had a fun day at the USCSS (United States Canine Scent Sports) scentwork trial in Westford, MA. She qualified in all 4 of her classes (Novice Interior & Vehicle, and Intermediate Exterior & Container) and earned a 3rd place in Containers.

The Game Fair was down at Hatfield House, Hertford and Glen of Imaal Terriers were there in the Discover Dogs area. Had an email that said “nice to see the Glens there” and just learnt (thanks Nicki) it was the Hanningtons manning the fort as well as the Atkins. Just as important as any dog show.

The Finnish Glen Speciality mentioned last week was far more than just a one day dog show as there was a weekend Glen happening which also included weight pulling, lure coursing, lots of competitions for children etc.

At the Game Fair

Ginny with her ribbons

and Glen of Imaal Terrier owners are adding rosette colour to their Easter displays. An excellent weekend for the Gleann Kennel with Cotton Cody and Damn Daisy taking Best of Breed & Best Opposite in Tallinn with Ungus MacGuire taking the top award at Vaasa International over Balloo Girl.

A cluster of shows in Massachusetts saw 2 Best of Breeds for Ber-D-Mar Sweet William O’Shea (with a Gp4 at Cheshire KC) over Daulton’s Tupelo Honey of Galore but she flipped it around at Trap Falls by getting the big rosette over him. The big news though are the three Glens showing the brains and putting initials behind their names. Tipperary Sweet Rosie O’Grady got her Canine Good Citizens, Griffin earned his third qualifying score in Rally Excellent with a second place and now adds “RE” to his titles and Niamh became a Master Barnhunt titled girl.

Great going everybody, you all do the breed proud.

A big weekend of Glen social get-togethers. The Glen Association in the UK and Glen folk in the Netherlands held a couple of successful events. Admittedly the “weather God” wasn’t too accommodating to begin with in Grantham but a great time was had by all. The Finnish after show was as convivial as ever with even more people to enjoy!

Close study at the Glen Association

Loving trimming in the Netherlands

Glen of Imaal Terriers and their owners…..on through the summer

Over in the States Glen Falls KC had Daulton’s Wild Night of Galore as Best of Breed, Sturgis KC saw Abberann Torcan add a Group 2 rosette to his ever growing collection and at Cudahay KC Daulton’s Seanchai of Blessington took Group 3

Summer officially starts in two days so let’s celebrate it with Glen of Imaal Terrier successes. At Swords Championship Show in Ireland BOB went to Abberann Phelan with Daulton’s Midnight Sky of Galore as RBOB. At the National Dog Show in Erfurt (Germany) Finn Glen Glen Limited Edition took Best of Breed and became both a VDH & Kft German Champion

The Finns are always out and about and at Rovaniemi International Show Gleann Easter Eamonn took home the senior rosette whilst at Uusikaupunki Group Show Best of Breed went to Glenrosedale Buagh Ri Arthur Milo and Glenrosedale Banrion Ros Croi was Best Opposite Sex. At Eagle International BOB was Pearytail Bonnie B Goode with BOS Pearytail Arm Candy Andy (great name). In Norway at Tromso International Gleann Ungus MacGuire was BOB with Balloo Girl Best Bitch.

A new name to the “brains and beauty” call is Bregorrey Sovereign Storm who took his first qualifying leg in standard preferred agility and also took first in class. 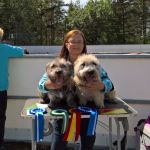 …and Glen of Imaal Terrier people are out and about.

Over in Ireland at Hibernian Abberann Phelan was Best of Breed with Daulton’s Midnight Sky of Galore Best Bitch. As usual the Finns were out and about everywhere with Gleann Ungus MacGuire BOB and Glenrosedale Banrion Ros Croi BOS at Rauma National Show at Wirmo BOB was awarded to Glenrosedale Buagh Ri Arthur Milo and at the Kotka Puppy Show Rosears Little Digger took the top award with Rosears Last Soldier No 2. Seinajoki Group Show saw Pearytail Black Cat become a new Champion. Only one report from the States, at the back to back Ravenna KC weekend Daulton’s Rory was Best of Breed both days with Daulton’s Princess C Hatteras taking Opposite one day and Emerald Isle Keeley with Daulton the other.