Last Saturday a Glen of Imaal Terrier went to the vets to be killed. He had been going to come into Rescue but the owner made a decision herself. She had got the Glen from a general rescue organisation, she told them she wanted it for a dog-friendly café, they had allowed it to go. Suffice to say the reaction of the Glen to this new environment resulted in rather a lot of blood. She was shocked, she spoke to the breeder (who had no idea the dog had been rehomed) and she spoke to Rescue. Arrangements were made. The breeder did some ringing around & discovered the Glen had gone into Rescue, not because of the house move told, but because it was unpredictable. It’s record included, amongst other things, killing a sheep and it had never been groomed because it growled. It was a dog totally unsuitable for its owner but the breeder had no idea there had been problems. The original owners had kept going with it, the dog ruling the roost, for 6 years but then it had got too much. The new owner instantly realised what the old owner had refused to do- it couldn’t go on.

Are you reading this with shock and horror? If so is it for what the Glen did? What the new owner did or how horrible my Glen isn’t like that at all? The Glen did what all Glens could do. The new owner did exactly and precisely what she should and your Glen could very well have acted/ will act just the same. If you think you “could have done something with it” would you like to offer a home to the 5 year old bitch who is in Rescue because she is good with people but downright nasty with other dogs?

There have been 6 others in this year. What else could a pet owner do, who had never owned a Glen before, who was sold an adult bitch to live with his adult bitch of another breed do? Stop cringing at the back there, you know and I know that that should never have happened but it did and this is the problem:-Glen of Imaal Terrier actual knowledge verses Glen of Imaal Terrier “we read it up on the internet and joined  Social Media” knowledge.

This was written back in 2002: This unfortunately illustrates something that does seem to be happening within the breed. Some admirers are so taken up with how wonderful their animals are they are forgetting to be exactly honest on the true temperament and character of the breed. We all love the breed to bits but it must be remembered and emphasised that Glens are generally not suitable for first time dog owners, unless they have a basic grounding in stock, as they will not be backward in walking all over somebody who does not enforce proper pack discipline and rules

There has been a Glen Rescue since 1980 and 2006 was the first year no dogs came in. There were a quiet few years and then it started again and now there have been 6 Rescues, 4 placements (Glens rehomed, with Rescue assistance, straight to a new home) and 3 mind-change placements but we expect so see them again sometime, in just 9 months. Once upon a time when you bred a Glen you were responsible for it until it’s death and it’s high time that came back into being. YOU BREED IT-YOU ARE ACCOUNTABLE FOR IT

Interestingly he has a full tail and until very recently all Glens were docked in Ireland so may be traceable via that.

Today is an “ask” from Glen Services. (It has been edited for the strong language in case any kiddies, or anybody of a delicate nature, reads it.)

Is there anybody willing to give a Glen of Imaal Terrier spayed bitch a home for the last few years of her life? This brindle girl is 13 years old and her owners, not to put too fine a point on it, didn’t expect her to live so long! They are both now retired and want to go off and do things and well….you know…. The horrendous thing is Glen Services does know as this is the third one over the years that has been cast aside because they were healthy and just hadn’t succumbed to Anno Domini at a time to suit the owners.

If you can help drop Liz malsville@rbt-int.com an email

Many thanks to the various people who enquired after “Blue,” the Glen of Imaal Terrier looking for a new home. He is hopefully off to Wisconsin, USA, very soon. The offers were very much appreciated. 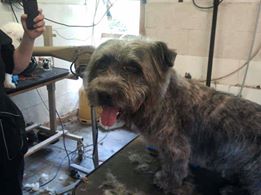 Glen Services asked if anybody would be willing to foster a Glen of Imaal Terrier whilst his owner sorted out housing problems. This has been received from her:-

“Delighted to tell you that (I think) a temporary home for Oscar. He’s going to ********* who has an 18 month male.  Oscar has been there a week now and appears to have settled down well.  He’s not barking and has stopped gnawing at his foot. The other dog has never lived with another animal and initially was rather unsure about the idea.  However, he’s now playing with Oscar and they share a basket which is great news.

Thank you so very much for all your help in our moment of panic!  Calmer waters are clearly ahead now.

That’s one boy hopefully sorted but there have been two other Glens out there and unfortunately both were in Rescue Kennels that, thank you but no, did not require assistance from any Breed Rescue. It isn’t even sure that one was a Glen as the size and weight given for a supposedly mature animal was incredibly small. They didn’t need any leaflets to pass onto new owners and they didn’t need a Glen expert to go along and assess him. The Kennels that he was in are very well known for giving the dogs in their care pedigree identification and thus boosting the adoption fee but we may obviously be being just a little cynical here. He has now been rehomed so hopefully he is (Glen or not) very sorted.

The other Glen is in America and this certainly is a cousin of us all as the pedigree is known. This Rescue Kennel also doesn’t want breed assistance so she stays in Kennels! Does anybody know anybody who can give a home to a Glen in Florida? McKenzie has been there a while and would surely appreciate a permanent berth.

Yesterday’s blog reminded a couple of people about Frodo (the Glen of Imaal Terrier in rescue). Frodo was placed with somebody who already has a Glen and his name is now Finley. Things are looking great so thanks for asking. 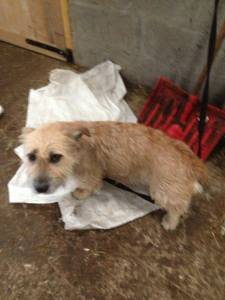 This is a three year old male (castrated) Glen of Imaal Terrier looking for a new home. His ex-owner is older and cannot handle him. Nothing is yet really known of any likes or dislikes. No health testing has been done.

Obviously an experienced owner would be ideal so has anybody been secretly fancying a dog to keep their bitch company or an older dog because they don’t want a puppy? email Liz malsville@rbt-int.com

There is a Glen of Imaal Terrier in a Rescue Centre in Wales. Glen Services contacted them early April but like many now (why?) they don’t wish to deal with breed rescues. That being said though the Glen still needs a home!

Besides doing Glen of Imaal Terrier rescue Glen Services also assists breeders with placing their older dogs. They currently have somebody looking for a placement  later in the year so has anybody got a male Glen (not a puppy) looking to pack the proverbial little “red spotted handkerchief?”. The person is extremely experienced Glen owner. If you can help please email Liz malsville@dsl.pipex.com

Rex is a Glen of Imaal Terrier that needs a home. Some people will have never seen a Glen like him but others will look in amazement at something that hasn’t been seen that much for over 20 years. Rex is a dog that shows breeding will out and his colour, closet grizzle and tan, tells you who he is….we think. We don’t know exactly who Rex is because he hasn’t got any paperwork but we are 99% sure of his breeding.

Rex needs a specialist home as he has already been with a few people who don’t understand what he is.