Where to start? We like to give great Glen of Imaal Terrier things the first shout so this week it was a toss of the coin and it came down heads so “the boys” are the breed’s lead in guys. Kelli sends news that “Griffin and Winston received their AKC Trick Dog Elite Performer (TKE)  titles! The new Elite Performer title is the highest level trick title and requires the dog to perform 10 tricks from the advanced and performer level tricks with at least 5 props and there must be a story.” It’s a first for Glens and if you want to see just what the boys can do take a look at You Tube The boys weren’t the only brains in action as Monique writes about Ginny “who Q’d in 3 classes at the Performance Scent Dogs trial in CT. She qualified in Advanced Buildings and then did very well in both Advanced Containers classes, earning a 2nd place in the first class and finishing her title in the 2nd class! ”

If the coin had come up tails the first news would have been of Boudivella Osca taking Best of Breed in Switzerland (as well as Utrecht) and so obtaining his International Championship title. Not to be outdone Romainville Uptown Girl and Boudivella Tegan also obtained their Swiss Championships. Not something that usual at all for Glens whelped in the UK. Blackpool Championship Show saw another first for Glens. Romainville Becks Blue for Zippor was Best of Breed with Jeonty Dreams a Dream with Karensbrae Best Bitch & Best Puppy. She was also taken into the YKC Terrier Stakes and won that, a first for Glens? Running with the “blimey we’re good theme” is a Group placing in Holland, again not a usual occurrence, but Jeonty Junior Fire and Ice was nodded to Gp4 at Zwolle.

Great session everybody and, as usual, you all do the breed proud!

Ginny, what a girl

Let’s begin this week in California as it’s a while since there have been a number of Glen of Imaal Terriers showing in that State. Yosemite KC had a back to back with Keadeen’s Second Star To The Right Best of Breed both days. Keadenn’s Happy Go Lucky and Keadeen’s Kind of Blue were the two Best Opposites. Contra Costa County KC (another great name) was another double triumph again for Second Star with Happy Go Lucky once again Best Opposite. Moving east to McKinley KC Daulton’s Captain Jack of Roseglen took the top Glen award there. Greenwich Kennel Club had Ber-D-Mar Sweet William taking BOB. Abberann Phelan was THE man of the weekend, at b2b shows at Wheaton KC he was Group 1 both days and Reserve Best In Show on the second!

The Scandinavian enthusiasts put us all to shame with their enthusiasm week after week. Rosears Made To Measure was Best of Breed at Forssa with Marfidal Santa Baby Best Bitch. In Palanga (Lithuania) Rosears Kate the Duchess was BOB and became a new Lithuanian and Baltic Champion. The Latvian Winners saw Gleann Indico Indy take the “big rosette” with Gleann Una Noonan Best Opposite. Miijoonakoira was another Best of Breed trophy for Gleann Flatbone Stiubhard with Astorren Best Bitch. In Germany, to celebrate 40 years of the SCWT there a special show was held for the Terriers of Ireland. BOB was Jeonty Junior Fire & Ice with Best Bitch Heart of Green Island Abbigail

Jeonty Dreams A Dream with Karensbrae was out in Varieties and at Dundee was Best Not Separately Classified.

Last week it was easy to decide which Glen of Imaal Terrier should lead the “honour roll” round up and it’s easy this week as well. Please everybody, stand and applaud Billy Tow vom Au Deich who, at the Dutch Championship Show, took Best Dog for the 7th time and Best In Show for the 4th. Oh yes, he was Best Veteran as well. Best Bitch was his kennel mate McJake’s Aivy. Another Veteran Best of Breed was Abberann Conan who added yet another ribbon to his tally at The National. Best Bitch came from the other end of the scale when Jeonty Jyn A New Hope got the nod from Junior. It was worth the trip for the Abberanns as Cosmic Cowboy was Reserve Dog & Reach For The Stars Ryanne Reserve Best Bitch. Best Puppy Amhard Off The Cuff

Nice to hear from Australia where “Neuter” titles are on offer. Taufield Queen of Tara was Runner Up Neuter and Best Neuter at her last two shows which gives her 96 out the 100 points needed. The European Winners in Dortmund saw Jeonty Junior Fire & Ice increasing his reputation with Best of Breed, Fire & Ice Naomi was Best Bitch. In Ireland Daulton’s Midnight Sky of Galore represented Glens in the Group ring. Gleann is an affix that regularly appears here but this week the first mention is from Canada and Dartmouth Kennel Club with a Group 4 and two Group 2s for Gleann Holy Hannah. Crossing the sea to Scandinavia and Jarvenpaa with Gleann Indico Indy as BOB and Gleann Halloween Hattie Best Opposite. Oulu Nordic Show saw Gleann Flatbone Stiubhard with the big ribbon and Gleann Halloween Hattie as Best Bitch. Gleann Ho Ho Hogan was Best of Breed at Seinajoki Group Show.

In America at Ravenna Kennel Club Tipperary That Girl was Best of Breed with Daulton’s Sailor John of Roseglen Best Dog at one show with the results repeated at another but it was G4 for American Girl & BBEG2 for Sailor John. Klanath Dog Fanciers had a back to back set of shows and Keadeen’s Sir Emmet Mingus Glas had a OHG2 and OHG3 whilst Keadeen’s Something Like A Phenomenon was Best Opposite both days but she went one better with a fabulous Puppy Group 1. Finnabair Shorlyne Caatskill Comedy Tonight at Chambersburg KC Shows also registered the Glen in the Group ring with a OHG2 and a G4.

Let’s start the Glen of Imaal Terrier round up for this last weekend in the UK with the EFG Open Show. It continued the “double theme” of National Terrier with both Best Dog & Bitch going to the same kennel. Golden Spurs was Best Dog (and Best In Show) with Romainville Billy Whizz Reserve Best Dog who also took Reserve Best In Show. Best Bitch (and Best Opposite in Show) went to Sigrid Helga at Pantcottage over Jeonty Lola May at Wickholm as Reserve Bitch with Lola, at one month short of 10, taking Best Veteran. Best Puppy was Jeonty Glynis Making Magic at Zippor. The EFG is held in conjunction with Birmingham Gundog & Terrier-the only time currently that Glen people can show twice in one day under two different judges-with Boudivella Osca taking Best of Breed there and Jeonty Jyn A New Hope Best Bitch. Also a Glen was performing in the very competitive NSC classes with Kingcottage Boogie on Basil taking Best NSC at Llanelli and District Canine Society Open Dog Show .

A quick flip west to Ireland for the Mid West Champ Show and Best of Breed Abberann Cosmic Cowboy. East to mainland Europe and Latvia with a BOB for Marfidal Pleasant Surprise and then Lithuania for their National All Breed Show and Finnabair North American Nebulon who took home the BOB rosette. Not often results from the Czech Republic so excellent to hear that Sachem Sagittarius was BOB at Budejovice. Coming back this way again, to Antwerp, it was Jeonty Junior Fire and Ice flying the breed flag there to BOB.

Way west to the States and here are the Group placers. Keadeen’s Sir Emmet Mingus Glas was BOB, and Group 2, at Palouse Hills Dog Fanciers with half sister Keadeen’s Second Star To The Right Best Opposite and the result was the same for the second show and Lewis Clark Kennel Club.  Western Carolina Dog Fanciers Association saw another  2 Group placements, Gp 1 & Gp4, for Finnabair Double D Friend of A Friend. News of a Terrier Puppy Group 1 at the Central Ohio KC Puppy Match for Finnabair Broc Rua Pegasus with Shorlyne. Columbia Terrier and Old Dominion KC of Northern Virginia saw double Best of Breed for Tipperary Columbo with Finnabair Shorlyne Caatskills Comedy Tonight Best Opposite at both. Columbo was again BOB at Baltimore County KC. A Baby Puppy Group 1 for Kilkenny’s The Gift Outright to Irish Spirits at Central Ohio KC.

Breed brains were doing well and Jeonty Dreams A Dream with Karensbrae got her entry into The Good Citizen class at shows by qualifying at 8 months old. Kelli Whitfield sends news that “Griffin played NADAC agility on Friday. He earned his first Open Touch N Go qualifying score and first place as Winston cheered him on! Monique sends word “Ginny earned her first Q and placed first in a Novice Preferred Jumpers class at an AKC Agility trial this weekend!!!”

People, you are just amazing!!

Glen of Imaal Terrier people; showing is in their blood. 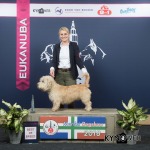 A nice haul for the Glenrosedales

What have we missed? It must have been something good as there were over 600 visitors on the 9/10 of February. If you were one of them do let us know what you were looking for-we still might be able to help.

Well “the biggie” of the AKC is gone and done with a triumph for Finnabair Double D Friend of a Friend. Taylor had certainly had a good run pre the event with two Group 4s and numbers 15 & 16 Group 1s. He celebrated his Westminster win with two Group 2s and a Group 3 on his return to Florida. Best Opposite to him in New York was Tipperary American Girl. Ber-D-Mar Sweet William o’Shea was picking up BOBs all over but the best named place must surely be Northern Neck KC of Virginia! Kate Flack was also out with Keadeen’s Sir Emmet Mingus Glas notching up 3 x BOb as well as 2 Owner Handler placements.

We weren’t as quiet as we usually are with Manchester now being in the “closed” period. Best of Breed was Boudivella Tegan with Romainville Becks Blue with Zippor Best Dog. Pajantick Hot Totty was Best Puppy. West Midlands Terrier had Jeonty Minnie MeMe BOB, Golden Spurs Reserve Best of Breed and Jeonty Letty Be Magic Best Puppy. Sporting Terrier of Yorkshire saw Amhard High Flyer getting the nod for Best of Breed and Amhard Manhatten was Reserve as well as Best Puppy. There aren’t a lot of Glen of Imaal Terriers in Scotland so showing is done in the highly competitive Variety classes but Jeonty Dreams A Dream with Karensbrae is certainly getting noticed. A Puppy Group 4 was excellent but then at Coatbridge, Airdrie & District BAVNSC Terrier, Terrier G1, Terrier Puppy G1 and Best Puppy In Show were all added to her precocious bow.

Jeonty Junior Fire and Ice was “The Man” in Eindhoven and he did it again at Gent as well as being pulled in the Group. Boudivella Osca also made the trip over and as Junior is still that, a junior, he picked up the CACIB.

The brains of the breed were not being rested. Quite a few Rally qualifications have been won but two ladies send the BIG news for Glens.Ginny spent two recent weekends having fun at AKC Scent Work trials.  She finished her Novice Buried & Interior titles to add to her already completed Exterior & Container titles, becoming the first Glen of Imaal Terrier to earn an overall AKC Scent Work Novice (SWN) title!  She also earned a Container Novice Elite title (SCNE) by qualifying for the 10th time in that class. Qualifying runs were also received in the Advanced Interior & Advanced Exterior classes (4th place)!   Louise sends news of Tula “Here’s to Tula who earned her Elite Division Level 1 Nose Work title today-another first for Glens. She makes me proud every day”.

Very well done and huge congratulations!! Don’t forget to send along anything you think may be of interest to the worldwide Glen family.