Blimey 9.00am in the ring is early. Everybody made it though and there were even spectators. Thank you for supporting Glen of Imaal Terriers even though it meant getting up at silly o’clock.

All-rounder judge Jeff Horswell restarted a Glen on the trail when he awarded Pajantick Razamataz his second CC and BOB. “Restarted” is the word as Quinn got his first CC at the ridiculously early age of 7 months. Shown lightly as a youngster he is now coming to maturity and has taken a Best In Show in France plus Best of Breed at Midland Counties last year. Reserve Dog CC went to Abberann Cosmic Cowboy, Nick & Ann are certainly devotees making the trek over from Ireland each year. Bitch CC was taken home to Shropshire by Sigrid Helga at Pantcottage and there was no mistaking the joy of the Reserve CC owner; floodlights will probably be ordered to hightlight Jeonty Letty Be Magic’s cards.

Once more Kirikee Celtic Warrior was Best Veteran (ready for the third year in 2020?) and Best Puppy was Borderglens Michaelmas. First showdog and winning that at Crufts, what an introduction.

Congratulations everybody!! Oh yes, the photographs below. We love you to share but, if possible, please give acknowledgement to either the blog or rbt-int

Abberann Reach For The Stars Ryanne 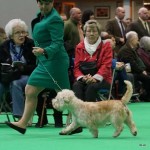 …this week’s round up has to start with the BRAINS side of Glen of Imaal Terriers. Last week the Glen agility finalist at Westminster was given a shout and now the results are in. Laura Trainor writes:-

Q IN STANDARD AT WESTMINSTER FOR NIAMH!
Double Q for the day!
That is her 100th lifetime Master Standard Q!

What an achievement so if anybody ever asks you if Glens can do Agility the answer is Oh, Yes!!!! They also can do Rally as Monique reports:- Ginny qualified for the 3rd time, placed first, and earned a title in the AKC Rally Novice class this weekend in Rye Brook, New York.  She then ran in the Rally Intermediate class and came in first place with a score of 99 out of 100.

We were also exhibiting as well. In Finland Gleann Eager Edgar was BOB at Kauhava Group Show and in Tallin, Estonia, Finnabair Broc Rua Arda of Gleann was Best of Breed with Gleann Kooky Kanye Best Opposite. The day after, Tallin Winter Cup saw Broc Rua in at Best Bitch with Rosears Master of the House Best of Breed. In the UK West Midlands Terrier had Jeonty Letty Be Magic as BOB and at Sporting Terrier of Yorkshire Amhard Off the Cuff was the man

Great going everybody and for the Brains Brigade….just wow!!

Glen of Imaal Terrier folk aren’t doing their Christmas shopping yet, they are still showing!

At The Glen Association Show, where one minutes silence was held in memory of Theresa Hadley, Best In Show was awarded to Abberann Reach For The Stars Ryanne with Amhard Manhatten taking the Dog CC. The two Reserves were Romainville Izzy Wizzy and Boudivella Oscar with Teamarach Rock Steady Beat Best Puppy. The day before had been West Midlands Terrier and Jeonty Letty Be Magic had taken BOB there with Jeonty Dreams A Dream with Karensbrae RBOB. In Germany Jeonty Junior Fire & Ice was BOB at Dortmund and at a Terrier Exhibition also in Germany My Dear Fellow Cordula The Angel headed the entry with Billy Tow vom Au Deich Best Opposite & Best Veteran.

Over in Canada Gleann Holy Hannah took three BOBs and a Group 3 and in the States Daulton’s Gedunk Malone from Emerald Isle was Best of Breed at the first Agathon Kennel Club show with Daulton’s Caoimhe of Pine Meadow taking Best Opposite and then being awarded OHG3. They reversed for the second show with Caoimhe going on to get Group 4 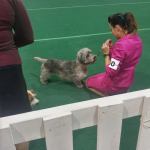 Wow, Glen of Imaal Terriers are doing well at the moment. At The French Terrier Club Show Pajantick Razamataz took Best of Breed and then Best In Show. Well done indeed. The European Winners was in Poland this year and Glens attended from Austria, Denmark, England, Finland, Germany & Poland. Cairdiulacht Aoife NicAlainna from Austria was Best Of Breed with Finn Glenn Glen Limited Edition from Poland was Best Opposite. Hammersmolles Star Hercules was the Best Junior and Spirit of Ireland Beautiful was the Best Veteran. In Finland Lahti puppy show saw Gleann Kooky Kanye take Best of Breed with BOS to Gleann Kinda Kim K. At Birmingham Gundog & Terrier Jeonty Letty Be Magic was BOB.

Over in America Keadeen’s Sir Emmet Mingus Glas was in Illinois for the Prarieland Classic and had a very nice trip. Best of Breed at Champaign Illinois KC, Mattoon KC & Sandemac with a Gp3 at Champaign. Opposite To him was Kilkenny’s Across The Universe to Setanta, Abberann Learning To Fly at Glendalough and Abberann Black Velvet Band by Galore. He was Best Opposite though at Illinois Capitol KC when Black Velvet Band took the BOB ribbon for the ladies

Ginny (and Monique for writing) regularly keeps the “brains” section running. “Ginny qualified with a 1st place in Open Jumpers Preferred at the AKC Agility trial at Paws n Effect in CT. Then she had a perfect run, again 1st place, in the Novice Standard Preferred class for her 3rd Q and her NAP title! Woohoo! It’s been a couple of good agility w/ends for team Ginny!”

Discover Dogs was in London and, as always, the enthusiasts who man these booths, whatever part of the world they are in deserve our thanks. Bella, Candy, Dylan, Leia & Mutley flew the flag proudly in front of hundreds of people. Many thanks to them and their people!