Glen of Imaal Terrier people have been certainly strutting their stuff. 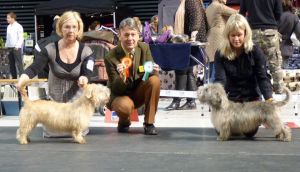 Belfast Championship Show saw Multi Ch Abberann Conan take a repeat CC from judge Alan Small, Best of Breed and for the second year running Group 4. Well done to Homer but as the Group Judge (and the appointed Crufts 2013 judge) Nick Hammond had already awarded him the CC at Belfast 2009 Glen people did think there quite possibly would be, at least, a shortlisting for the Glen of Imaal Terrier. The Bitch CC went to Winnie Wanna Make Music By Jeonty with the two Reserves to Abberann Torcan and Ch Abberann Ennya. Winni getting the CC means there are now three bitches waiting that elusive third and they couldn’t be more different animals; young Winni at not yet 18 months, Muffin (Jeonty Maybee Daysee)  coming up to three and a half and Tierney (Brockland Belle Bregorrey) not far short of Veteran. Interesting few shows ahead!

Not often news from Canada but Toronto had an Irish Breeds Show and Sean Delmar was over to judge. Best of Breed was Ch Finnabair Rocket’s Red Glare. If you look at the BOB special award that Sean is holding it’s the aforementioned Homer.