Amsterdam WAS supposed to finish off International Week but let’s have just one more. Diane Pucin is a Glen of Imaal Terrier owning writer for the Los Angeles Times. Like all of us she can often get a mention of Glens in somewhere but this must surely be a first for College Football Weekend! 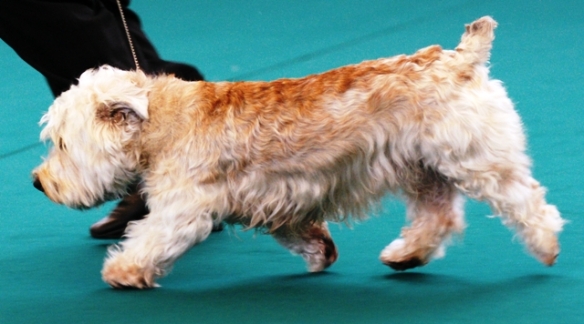 The biggest dog show of the year in The Netherlands is the Amsterdam Winners. Under judge I. Borchorst Best of Breed Glen of Imaal Terrier was Daisy and Best Dog was Buster, the third year on the trot he has taken such an award. Obviously foreign travel appeals to them (and Jean)

Back in 2004 Glen of Imaal Terriers joined the “full” register of the AKC with Scoobie and India actually gaining their Championships that first weekend. A mere four years later there have been 72 Glen Champions in the States. To many Glen exhibitors in the rest of the world that appears an incredible number; the US is a huge place but WOW!

The UK Glens hit “full” status in 2007 with Homer and Daisy being the first two Champions but since then there has only been one other. The first Champion in Germany was Rhett Butler in 1985 and he also had the registration number of 001 but how many Champions have there been since then? Anybody know the figures for the rest of Europe? It would make interesting reading.

Anybody who read this earlier on today will now be blinking and asking themselves if they had read the number of AKC champions wrong because “didn’t it say…..” Yes it did but Monique forgot to take her socks off when counting all the American Champions so got a little cross eyed with the number of times she had used her fingers. She suddenly thought she may have and counted up with fingers AND toes….hence the reduction to 73. Still a WOW of a figure!

……..and despite huge temptation the matter in hand will still be given well deserved priority. In a reverse of yesterday Belgian Champion Brenna Anne adds Dutch Champion to her list and Brenn is another Glen of Imaal Terrier that illustrates how well the veterans in the breed can do!

This is the temptation; the report from CAWC. A “nice” week planned of just doing Glen things with no politics and this appears. Have a look at http://www.dogworld.co.uk/News/48-reduced-breeds for the easier to read version (not so long). How do you see the future of Glens after that? A breed with many acknowledged bar-sinisters so it should be alright or an achondraplasic breed with a known genetic problem? Exactly!!

The International Week idea might work because another Glen of Imaal Terrier recently added another Championship outside their own resident country. Dutch Champion WannaBe Buster can now add Belgian to the list. Anybody volunteering a Glen, or any international news, for day three?

It is well known that some judges are fully paid up members of the international gravy train and none more so than Sean Delmar, president of the Irish Kennel Club. Last week he was judging in Puerto Rico and he must have been really gob-smacked to actually encounter a Glen of Imaal Terrier.  Fiona (Am Ch Fiona The Wicked) made the trip South and went home with a Puerto Rican and Pan American Championship PLUS a Group 3. Does this make her the first American bred Glen to get a Group Placement under FCI rules?

The blog wasn’t very busy when it started life but since the PRA FUNd raising event in July it has gone from strength to strength and rarely misses a day having a gossip, moan, scream or congratulations! It’s adding a new string to its bow by going on a Margarita experience; it wants to experience first hand the difference between a 1800 tequila, triple sec (lime juice of course) and a 100% blue agave tequile, agave nectar Margarita. The things that this blog is willing to suffer……

It’ll be back on the 25th November, refreshed and sober, but obviously its mail box will still be open for any news so don’t let it down!

Have a look at  http://www.the-kennel-club.org.uk/services/public/health/search/Default.aspx and maybe keep it in your favourites for future reference! Going back over tens of Kennel Club Press Releases that one can’t be found anywhere and it is probably one of the more useful!

At the recent INTERRA (International Terrier Association) Show held in Denmark Best Puppy In Show went to Tom-McCormac Noisio(Agent z Roxburku/McCormac Etain Echraide) to give him his official name. Congratulations to Christina!!

There aren’t that many Glen of Imaal Terriers that have won a Best In Show at a multi-breed show but have there been many puppies that have taken a Best Puppy In Show? Usually they look to gawky and awkward even to contemplate. Little Lee did it in the UK back in the 80s but off the cuff no others spring to immediate mind.

Alright this is going to be political (again) but just what do we have to do to get a fair say in the media? Tens of thousands of pounds have been raised by dog people for health projects. They spend large amounts of their own money on having their animals tested for varying problems and what do they get in return “oh dear, oh dear, people are standing up to the very one-sided view of PDE so they are all nasty”.

The Kennel Club should have stood up when asked for a comment but what did they give; “oh dear, oh dear nobody should be picked out individually”. What in tarnation did that programme do to dog people? It led to shouts of “Nazi” being hurled at Pedigree Dog people. People who had bred stock all their lives to well-known, established and accepted principles were suddenly bracketed with holocaust initiators. Actions taken within the law, and by the law, were suddenly questioned “because that programme said so”.

The stereotypical Independent reader was always supposed to be trendily left wing but lately it has leant the other way but obviously not where balancing SOME facts are concerned. It seems what Tony Blair said back in 2007 “Comment is a perfectly respectable part of journalism. But it is supposed to be separate. Opinion and fact should be clearly divisible. The truth is a large part of the media today not merely elides the two but does so now as a matter of course.

In other words, this is not exceptional. It is routine. The metaphor for this genre of modern journalism is the Independent newspaper. Let me state at the outset it is a well-edited lively paper and is absolutely entitled to print what it wants, how it wants, on the Middle East or anything else.

But it was started as an antidote to the idea of journalism as views not news. That was why it was called the Independent. Today it is avowedly a viewspaper not merely a newspaper.