Sam is a 4-5 months old Glen of Imaal Terrier who needs a home. Can you help?

There will be a “Celebration of Vulnerable British Heritage Dog Breeds” in the main arena around 4.00pm. Twenty rare British and Irish breeds will be taking part and all handlers will be dressed as historic or literary characters associated with each breed.

January still but Championship Show schedules for the late Spring/early Summer are arriving thick and fast. Judges for Glen of Imaal Terriers are:-

SCOTTISH KENNEL CLUB-Alan Small. A Terrier man who has judged Glens for quite a few years. His second set of Challenge Certificates, his first at WKC 2007 with the top awards going to Daisy and Homer.

BATH-Karen Forbes (No CCs). A Glen of Imaal owner since 1996. Living in the north of Scotland but has the only Show Certificate of Merit for a Glen and a Champion.

THREE COUNTIES-Jean Rogers (No CCs). A Glen of Imaal owner since 1988. Dominated the “of the Year” competitions for 15 years, three Champions bred in one litter.

BLACKPOOL-Peter Chappell (No CCs). A Terrier man with a long connection to Glen of Imaals so possibly a waste of a judge with only four classes scheduled.

From Scotland comes news of a group placement (3) for Ceilidh (Ch Jeonty HasACeilidh at Karensbrae). Has any other Glen of Imaal Terrier obtained one yet this year?

Jean says “ta muchly” for the flowers, chocolates, presents, cards and messages she had for a recent, not to be mentioned, event. The slight delay passing on her appreciation is due to being determined to master the next string in her technology bow; the digital camera and its using, editing and sorting for the computer and now she has…… 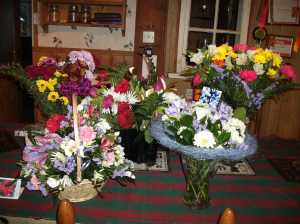 During December some Glen of Imaal Terrier people very kindly sent photographs for inclusion “on a bit of website rebuilding”. The website is now finished, ready for viewing……and comments!