Yes, this is a UK blog but many American Glen of Imaal Terrier owners read it. Sandy jumped out of the car whilst the owner stopped for coffee and hasn’t been seen since. If you have Southern Californian friends or groups please share 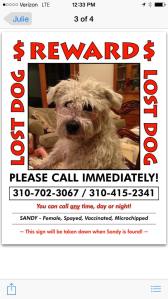 It’s the 27th of the month and it’s been pointed out that the KC Journal hasn’t been linked to yet. Sorry, here it is

There are a week of Glen of Imaal Terrier happenings, from agility to rally to barn hunting to showing, in Pennsylvania USA. Full details can be found on the American Glen Club site.

We’ve had a look at Glen of Imaal Terrier tracking/nosework in the USA and UK and now Finland. There the intention is to track wounded deer so obviously something a little different is used to aniseed or sausages.

Tools of the track

We’re used to hearing about Glen of Imaal Terrier siblings taking awards at the same show or in the same area but what about different countries? At Welsh Kennel Club Best of Breed was Bregorrey Madam Defiance with the dog ticket (and Best Puppy) going to Gleann Dynamo Man at Jeonty whilst over at the Baltic Winners and the Baltic Terrier Show in Estonia brother Gleann Dynamite Mike was BOB both days. Stiubhard Cutie Pie at Gleann took Best Bitch to him on both days. It was a double weekend also for Marfidal Emousonia who took home the big rosette at both Kouvola and Heinola. Marfidal Spsrkele of Meomodo was Best Bitch to him at Kouvola.

At the Arctic Circle Dog Show (how about that for a name) MacNallys Gracie was Best of Breed and at Tralee, the final show of the Irish Circuit, Abberann Phelan was BOB, and a very nice Group 3, with Ballyclare May Best Opposite.

A breed first is proudly announced by Anne-Marie Pember with her Kera taking the Barn Hunt Master title and Mary Householder is equally proud to tell everybody that Hannah has obtained her coursing ability title.

You want Glen of Imaal Terriers at work, rest or play for the EFG 2016 calendar…like what exactly do you mean? The picture below illustrates beautifully what is meant. Why not send your Glen’s holiday snap, if you haven’t already done so. The more the merrier and it isn’t that long until the first week of September! 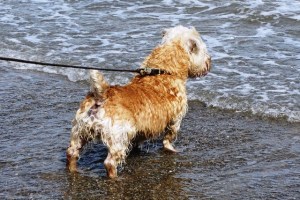 Always it is the unexpected that catches imaginations. Last week, after Oliver and the Woody, the emails and conversations were all about nosework/tracking. This is another site for anybody interested in the UK and Tiina has promised photographs of a Glen of Imaal Terrier tracking in Finland.

Postal entries for Belfast Championship Show close today. Terrier day is Saturday 26th September and Glen of Imaal Terriers are to be judged by Ger Cox.