Do the Kennel Club ever come up with anything original? This press release, obviously in the pre-Crufts flurry, is the exactly the same rubbish they turned out for Glen of Imaal Terriers a few years ago and it took a very long time for the fallout to subside. Suddenly some Glen puppies appeared at £1500 because…..they were as rare as Giant pandas. Bitches sold not for breeding had puppies because……fill it in. Glen Services even had more than one person phone them up to ask if they had any Glen males in because they would take them and mate them to (fill in the blank) and then the pups would be half Glens and as they were as rare as……….they would be valuable. The list went on and on and that phrase “rare as” was quoted everytime. Many Glen people were in total disbelief of the “help” the KC had given us and when the BBC ran with it there was just despair in some quarters.

To be fair though Ronnie Irving, then Chairman of the KC, when approached regarding the problems being caused by their statement did say that the numbers quoted by them were for only one year in one country and possibly did not accurately reflect the state of Glens worldwide. With this and numbers from other countries (there had never been so many of the breed as there was at that current time) it was managed to get the article removed off the BBC websites as it was proven that it was “inaccurate and without real factual base”.

Who knows though perhaps it might do the Skyes some good, somehow, and it will bring the positive reaction they feel it may but it certainly didn’t do a lot for Glens to be “selected” for a KC Press Release!

The FCI have released BASIC STATEMENT FOR SHOW JUDGES-DOGS FIT FOR THEIR ORIGINAL FUNCTION and it makes interesting reading with one or two things being certain eyebrow raisers. The thing though that is of interest to many exhibitors comes under Abundant Coat and Grooming/Presentation of the Dog: It is increasingly common that breeds, standing as well as moving, are presented in the ring on a upstraight and neck-tight leash. This does not promote the welfare of the dog, and moreover it inhibits correct movement and makes natural and breed specific movement impossible to be achieved. A dog should be shown on a loose leash in a natural way with a correct and breed specific movement. Pulling the dog up at the neck and/or tail is prohibited. 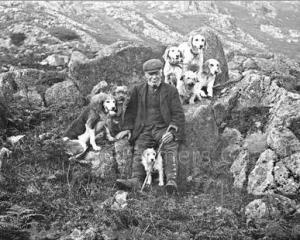 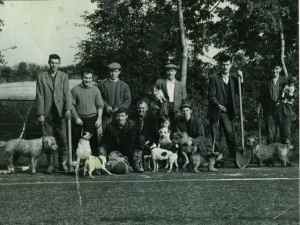 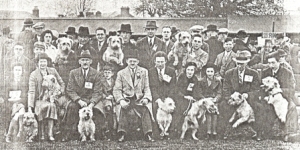 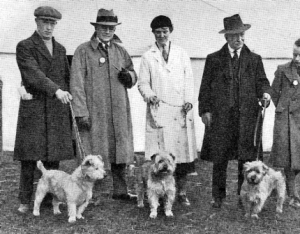 Westminster has just gone and Crufts approaches so let’s talk Glen of Imaal Terriers. Time after time conversations/emails/social media/letters run the “what’s correct?” road. Maybe the above eight photographs can help. Admittedly two of them may not even have Glens in the frame but from what is known about the breed it seems to be a fair assumption that one of them is and the other could very well be….but how can this be known? Well just look at them all, taken over more than 60 years, and you can see the same dog; an animal with the same characteristics through and through.

Some are a little shorter in the body than others and some slightly more bowed in front but they are Glen of Imaal Terriers. The picture with the small child makes the dog look huge but look again. The Glen is in very full coat and how old the child? Maybe 3? The dog isn’t taller than the top of the child’s legs. No bigger than the other Glens that are up to their adult owner’s knees in the other shots.

The American Kennel Club Gazette is now online. It features a Glen of Imaal Terrier column contributed to by Colleen Dougherty

National Terrier is on Saturday April 5th and (postal) entries close tomorrow. 12 classes for Glen of Imaal Terriers are to be judged by Fran Kaye.

The Annual General Meeting of the Glen of Imaal Terrier Enthusiasts and Fanciers Club is to be held on March 23rd at Mappleborough Village Hall, Studley, B80 7BT.

Items for the agenda and nominations for officers and committee need to be sent to Jean Rogers (Acting Secretary) four weeks before the AGM.

All items for inclusion on the agenda must be in writing and proposed and seconded by fully paid up members of the club.

All nominations for officers and committee must be in writing signed by the nominee and proposed & seconded by fully paid up members of the club.

“You put the Kennel Club Gazette, Journal or whatever it calls itself now on the blog last month. I can’t find it online so can you do February on the blog again?”

Of course we can. A reminder has been written to put it up every month so anybody who wants to read such a (now) scintillating document will know where they can get it. Most interesting thing in it any month now is the forthcoming Glen of Imaal Terrier judges

There is just over 2 weeks to go until Terrier day at Crufts. The entry of 26 Glen of Imaal Terriers (12 dog, 14 bitches) for Mel Hardy will mean a very early start as the breed is in the ring at 9.00am and a Friday is not usually a good travelling day for early morning traffic. At least it should mean everybody who wishes, except the Best of Breed of course, will be able to leave the NEC at a decent hour and avoid the teatime crush!

Glen of Imaal Terrier people NEVER give up going out and about. The big show in America is Westminster and Best of Breed was GCH Finnabair Ardmore Ned with Ch Tipperary American Girl JE Best Opposite Sex. As always a video is available. Ned is having a great start to the year with 7 Group placements in 11 shows. At the Tallinn Winter 2014 International Show Glenrosedale Aoibheann Nion Rós was BOB and Glenrosedale Ardal Ridire àin Rí was BOS with Stiubhard First Lady at Glenrosedale Best Puppy. Gleann Aine of Antrim added Slovenian Champion to her tally.

Also the “brains” have been working with Winston (Finnabair Winston O’Reilly) adding Junior Earthdog to his collection of initials and Winston does a different kind of beauty winning a Valentine Pet  Contest. Well done everybody! 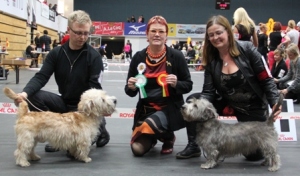 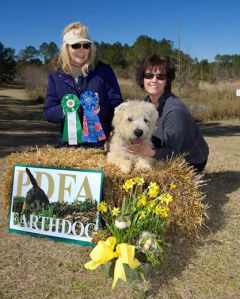