Glen of Imaal Terriers-SKC May 2010

The PRA FUNd Raising Companion Show (on July 17th) may only be one day but the usual invitation is extended for people to come for the weekend and some caravans and tents, plus their owners of course, have already booked in. The hotel that some have stayed at previously has changed hands so Supreme Inns is what you need to look for now.

This invitation is just not for Glen of Imaal Terrier people-all and everybody are welcome.

The AGM commences at 11am.
Since notice of the meeting and a proposed agenda appeared in GOITA’s Spring newsletter, additional agenda items and rule changes have been submitted and so, in accordance with the club rules, the finalised agenda will be sent out to all members. If you haven’t yet received the new agenda, you can contact Anne – Email: anmeha@aol.com or Tel: 01777 703417 – to request one.
This year, there are agenda items that should provide some interesting and lively debate. As stated in the Editorial of the Spring newsletter, “It is important that members feel they are part of the club and that their input is important …”. The AGM is the members’ meeting; it would be nice to see a few more ordinary members attending and being a part of the decision-making process on matters affecting the future of our wonderful breed. Please do go along! There’s lunch and the open show to look forward to afterwards!

The Open Show opens at 1pm and judging will commence at 2pm. The judge is Pat Chadwick.
There will be refreshments, a raffle (for which contributions would be much appreciated!), superb rosettes and specials from Royal Canin. 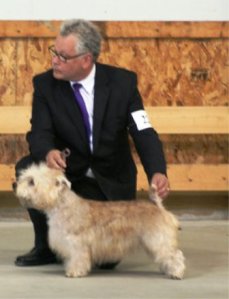 Curry (Ch Coleraine’s Mandalay Royalty) took Back to Back Group 1’s in a well supported Glen weekend. The first time a Glen of Imaal Terrier has achieved such a thing. Many congratulations!

At Scottish Kennel Club Glen of Imaal Terrier judge Alan Small awarded Barney (Int Ch Brockland Brayhead Lad) the Dog CC and his sister Tierney (Brockland Belle Bregorrey) the Bitch Challenge Certificate with Barney getting the nod for BOB. The two Reserves went to Woody (Johnny Be Good at Romainville) & Muffin (Jeonty Maybee Daysee). Muffin has had a Reserve CC before but for Woody and Tierney it was their first time for the “Green Cards”.

The Kennel Club Breed Record Supplement for the first quarter (Jan-March) shows 12 Glen of Imaal Terriers being registered with them, which is exactly the same number as in the corresponding period last year. Admittedly it isn’t a lot but the Glen has “two lives” and the KC unregistered side had four known litters at the turn of the year so the breed isn’t quite as rare as some will undoubtedly insinuate sooner or later.

Glen of Imaal Terriers-Thank you to the committee for the judging appointment and to the exhibitors for their entries. Although the entry was not large the quality was very good overall, breeders in a numerically small breed are really at a disadvantage when judging, as quite a few exhibits were unable to enter.

Looking at the breed as a whole, numbers of dogs exhibited have decreased dramatically in the last few years and although one does not want the breed to become commercially popular it is not good for the breeds’ continued existence to decline in this way. Whilst touching on exhibitors, I really do think that although we must remember that the breed is of working origin, when we are in the show ring much more importance should be made on presentation.  A judge is there to judge to the standard of the breed in question and it is not much to ask that exhibitors at least make sure that their dogs are at least groomed and bathed to be presented in their best light. Not only did I notice this but other judges have made note of it, all rounders will often not feel able to give a dog top honours as they do not want to send an unkempt looking dog into the ‘big ring’. The other most noticeable thing was that upper arms seem to be getting shorter and attention should be paid in future breedings as it restricts the front movement  and is more tiring for the dog in prolonged movement.

Junior dog 1) Hardys Amhard Freebooter,  14 month male Blue/brindle. Good head and expression with a good mouth, correct ear set. Topline good, good shoulder placement like to see longer upper arm. Hindquarters need more bend of stifle but makes most of what he has. He moves soundly and was in good coat.

Limit Dog 1) Hadleys Donvaleset Rebus, 3 ½ years blue male with good head and expression. He has a strong jaw and good mouth. He was good in both front and rear angles and a well made dog, sound and moved very well. His coat is correct and in good coat.

2) Hardys Amhard Dansak, 4 years Blue/brindle male, with good head and expression although his head could be broader, mouth correct. His front angles are good but needs better bend of stifle at the rear which would give more drive. He is sound but did not move as well as 1 and he was not in the best of coat today.

Open Dog  1)Harleys Beatrix Boy with Windarra from Donvaleset 4 years blue male with good head and expression, good neck and shoulders, but upper arm could be longer. Sound and his movement and drive was very good, his coat could be harsher. Was pleased to award him the CC his third I understand.

2) Welchs Ch/Belg Ch Brockland Brayhead Lad 5years blue male with good head and expression, his head is broad and strong. Good angles front and rear, sound and moves well but needs more drive behind. Both these dogs are excellent and on the day the first dog was in better coat and moves slightly better. I am sure they will change places often. Res CC

2)Hardys Amhard Extra Spice 2 ½ years wheaten female finer build than one just like to see a bit more of her, not helped as she was not in coat today. Notwithstanding a well made bitch, would like better angle of front but sound and moved very well with outgoing temperament.

3)Hadleys Donvaleset Domino Blue/brindle 2  ½ years blue/brindle well made with good expression, would like a stronger head. Good angles front and rear carrying too much weight which seemed to affect her movement, as she did not want to move today.

2) Sealls Brockland Belle Bregorrey 5 years blue/brindle female, smaller type than one and well presented. Good head and expression front angles not as good as 1, moves well, but is close away. She was not carrying such good a coat as the first bitch.

Gleann Know-How recently returned home to Finland after a “European Tour” with Bulgarian, Macedonian and Montenegran Championships to add to the eight already held……Multi-Champion Glen of Imaal Terrier certainly fits the bill here!