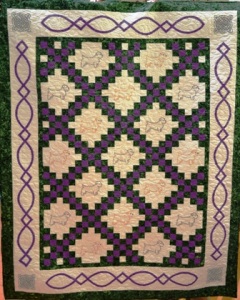 The quilt is being raffled in aid of funds for the Glen of Imaal Terrier Club of America and the draw will take place at the Dinner held during Montgomery weekend. Non Americans are more than welcome to join in-6 tickets for $10-via Paypal’s send money system. All tickets will be printed with the purchaser’s name and address and added to the ones mailed in. Further details can be had from Laura Trainor ltrainor@stny.rr.com .

Optigen are offering 30% discount off DNA tests at Val Tiller’s next Optigen 20/20 Clinic on Tuesday 17th September, in Epsom, Surrey.

Glen of Imaal Terriers are invited to be DNA tested for crd3-PRA. Clients may attend the clinic, or be Postal Participants.

Monique sent this a couple of month’s ago “if there was an opening” it was busy over the summer so it was still in the file.

Rainbow Springs Oliver Twist SE RN NW1  RATN has been enjoying the new sport of Barn Hunt over the last few weeks.  He’s traveled to trials in North Carolina and New Jersey in addition to staying in his home state of Connecticut.  After failing at his first few attempts in the novice class by either eliminating on a hay bale (what’s a boy to do?) or choosing tubes with dirty litter instead of a live rat, he finally succeeded by qualifying at 3 trials in a row.  Oliver ran through tunnels formed by hay bales,  climbed at least one bale high, and finally indicated the tube with the live rat. By earning a Novice Barn Hunt title (RATN) at the mature age of 13 ½ years old, Oliver is the oldest Glen of Imaal Terrier to ever title in an AKC recognized sport.  We are immensely proud of our working dog!  For more information on this new fun event, go to barnhunt.com

The Open class differs from the Novice class in that the dog must locate 2 hidden live rat tubes instead of 1 (plus, there are 2 dirty litter tubes hidden without rats to trick the dogs), the tunnel of hay bales is longer with a turn, and one section of bales is 3 levels tall so the rats can be hidden higher up (and one must be).  2 ½ minutes is the time limit to find 2 rats, climb bales, and tunnel. 3 qualifying legs are required to earn a RATO title.

He has  now moved into the Senior class; appropriate considering his age.  4 live rat tubes are hidden (plus 3 with dirty litter sans rat) in the more complex course, the tunnel has at least 2 turns, and 2 sections of bales are at least 3 levels tall.  The time limit increases to 3 ½ minutes, but it is a fast paced event with rat tubes being located and handed out of the ring constantly so the dog can refocus and find more vermin.  A very fun sport, especially for spectators! 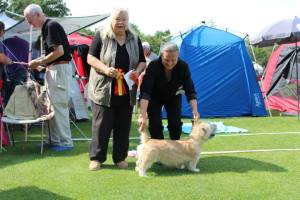 …..the 15th September. That’s the date of the Irish Sporting Glen of Imaal Terrier Club at Donoughmore Hall, Castleruddery, Glen of Imaal, Co Wicklow and everybody is very, very welcome! 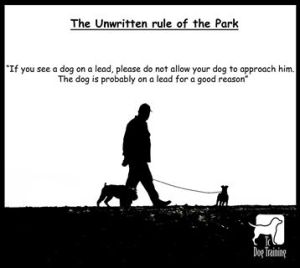 Thanks to the various people who sent it along-it’ll probably ring true with a lot of Glen of Imaal Terrier people.

Following this year’s Companion show at Swineshead the acting committee met to discuss what needed to be done now we are formally recognised.  It was a packed agenda and many things are work in progress but just  to make sure everyone is kept informed it was agreed to provide information on what is happening.

The Kennel Club required one or two minor amendments to the rules ,which were accepted. The club year was fixed as Jan 1 to Dec 31st  with AGMs held in the Spring to give the secretary time to put the KC returns together for July.

A formal AGM will be held in spring next year to ratify the appointments of committee and officers and give everyone the opportunity to be fully involved.

A judges sub committee is putting together judging lists in accordance with KC rules for the committee to consider.  Hopefully that will be completed by the Autumn.

A judging Seminar and a breed show were agreed in principle

In addition to the above, intellectual property,  a newsletter twice a year, questions about the website, the blog and matters dealing with the secretary’s work and the bank accounts were all talked about.

Over the weekend a new Glen of Imaal Terrier Champion (subject to KC) was crowned when Zena Thorn-Andrews awarded a 3rd CC to Romainville Aoife at Pajantick with the Dog CC-and Best of Breed-going to Romainville Billy-Whizz so a double day for Kathy George. Best Puppy was Amhard High Flyer.

Beauty and Brains in Am Ch Tipperary American Girl as she has obtained her Junior Earthdog title. Well done folks!

When Bochem and Optigen were looking for the rogue gene that caused PRA in Glen of Imaal Terriers, and finding again and again it wasn’t what they hoped, some people mused on a possible modifier. This was due to the diagnosed PRA affected dogs that, in some cases, just didn’t “Pee” i.e. didn’t Progress as per the name. Other folk were very sceptical about that idea and it has now been proven (thankfully) they were right and modifiers weren’t involved. This link is for those who said but it is very, very rare for such things to crop up-as you can see the ones that were wondering weren’t totally tilting at windmills.