Third week of March so a Glen of Imaal Terrier round up has to start with Ireland. At the Celtic Winners BOB was Abberann Conan with Abberann Reach For The Stars Ryanne. Conan then went on to take Best Veteran In Show. Glens just get better as they get older! The St Patrick’s Day Show saw Daulton’s Midnight Sky of Galore take Best of Breed with the evergreen Conan Reserve Best of Breed.

In Lithuania the Vilnius Cup was a win for Gleann HoHo Hogan with another “eternal youthful” BOS in the shape of Gleann Una Noonan, it was a 3 show weekend (all International and one the biggest in the country) and the results were repeated at all three shows. At Weelde (Belgium) Boudivella Oscar was BOB which gives him his Belgian Championship. Combine this with his Swiss and KC Championship and he now becomes an International Champion. The first UK based one for quite a while. Romainville Uptown Girl was Best Bitch. In Offenburg (Germany) My Dear Fellow Calimero the Angel was awarded Best of Breed. In Munich Calimero was Best Opposite Sex with Best of Breed going to Spirit of Ireland Beautiful who was also Best Veteran.

Over in America the 4 Show Louisville Cluster in Kentucky had good entries. Starting with Mid-Kentucky KC it was a win for Finnabair DD Ain’t It The Life with Daulton’s Ciaran of Pine Meadow Best Opposite/Best Bred by Exhibitor and BBE Gp4. Friday was Louisville and again DD was Best of with Ber-D-Mar Sweet William O’Shea Best Dog. Ciaran was Select, BBE and BBE Gp3. Evansville was next with Sweet William O’Shea and DD once more (William Best & DD BOS) Louisville KC finished off the cluster with Sweet William O’Shea once more taking the top award and Finnabair Shorlyne Caatskill Comedy Tonight Best Opposite. Comedy Tonight has always been Owner Handled and the Cluster saw her obtain enough points to be awarded her Grand Championship.

Before hitting the Brains section a mention for an Open Show win; Amhard Manhatten was Best of Breed at Retford.

In the Brains Luna leads in with her Gold Good Citizens and then Ginny as Monique reports that “Ginny qualified for the 3rd time in the AKC Rally Intermediate class last weekend, earned her RI title, and was presented with a new title medallion from the First Dog Training Club of Northern New Jersey!”.

Winston & Griffin became the first Glens to earn AKC Stunt Dog Titles with both earning Novice & Open Stunt Dog titles. Ending with a new boy; Henry was first in his scent detection class. Nice one Henry, let’s hear more from you and many, many congratulations to everybody 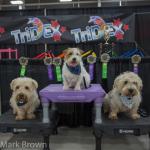 My Dear Fellow Calimero the Angel