Last year Jean Rogers had three Glen of Imaal Terriers from the same litter acheive their Championship; an event to be marked. Boston was the first show of the year so the obvious place for a small presentation. Tony was told what was going on and told to get her there. 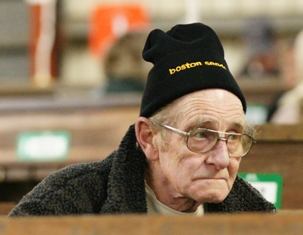 It took Tony a lot of thinking to convince Jean he should accompany her and then to keep her in check so she didn’t disappear off for a couple of hours “just gossiping” Rather than just sitting on the benches he accompanied her everywhere. A man determined to do his job!!

Finally Jean was presented, on behalf of her friends in the breed, with a box of chocolates….just a small one, of course. Also there was a canvas print of Buster; the one out of that litter that she herself had retained and made up. 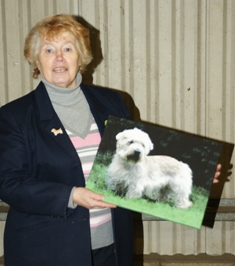 Yesterday, sfter a long battle, Bryn Cadogan lost his fight and died. He was an all round terrier man who had a long association with the Glen of Imaal Terrier. Many years ago he accepted three judging appointments with ten months at different ends of the country. Hr was quite surprised to be told that such a thing was NOT DONE in Glens (we liked two years) when it was quite acceptable in other breeds back then. He gave a gentle grin and said he would be sure to remember and unlike some always respected this.

Bryn was always charming, polite and good with a critique. He was so pleased to be asked to judge the First Glen Association Championship Show and, when speaking at a later show, said he still wouldn’t do them again for two years. The gentle grin always present.

Bryn was the judge elect for Glens at National Terrier this year so hopefully somebody will be appointed with the understanding of the breed he had. Our sympathies are extended to his family.