The rest of the Northern Hemisphere may be thinking WINTER but dog people, and particularly Glen of Imaal Terrier folk, are certainly out and about.

The Danish Winners was a BOB for Pearytail Artless Tess with McCormac Setna Sithbacc Best Dog. Another Pearytail day at the Norwegian Winners with P Bonnie B Goode getting the nod over Marfidal Rohjaton Pohmu. The Baltic Winners saw Gleann Dynamite Mike taking Best of Breed with Pearytail Bonnie B Goode Best Opposite. Jyvaskyla International finished a great collection for the Pearytail kennel with P Candy McCoy taking BOB. A back to back weekend in Germany had McJake’s Angel’s Son Djuke taking Best of Breed both days with McJakes’s Aivy Best Bitch one day and Mr Dear Fellow Brunhilde de CoCo the other. Back to back ICK shows saw Daulton’s Midnight Sky of Galore take BOB with Abberann Phelan Best Dog, the results flipped around for day 2. Abberann Conan did Glens incredible proud by being awarded Reserve Best Veteran In Show

The Secretary of the Dutch Glen Club sends the following: Dogshow Bleiswijk brought two Dutch Champions. BOB was My Dear Fellow Billy the Kid McJakes what gave him enough points for the Dutch Championship.BOS was Madra Áthas Aoife Aideen an tSolais who also became Dutch Champion. Well done both!

The States have had, amongst other things, the big cluster in Philadelphia. At Penn Treaty KC Ber-D-Mar Nate the Great at Wicklow was Best of Breed with Tipperary Violet Dowager Countess Best Bitch. Violet was again Best Bitch at Greater Philidelphia Dog Fanciers Association with Ber-D-Mar Sweet William O’Shea taking Best of Breed. Kennel Club of Philidelphia was a success again for Nate the Great with Daulton’s Tupelo Honey of Galore Best Opposite. The 4th Show of the cluster saw Tupelo Honey Best Opposite again with Sweet William O’Shea Best of Breed this time.

Down in Florida at Seminole Dog Fanciers and Greater Ocala Dog Club it was an incredible couple of days for Gleann Cotton Cody taking Group 2 and 3 respectively. Kilkenny’s Irish American Classic at castle rock was Best Bitch both days. Another Group Placement up at Whidbey Island Kennel Club with a Group 2 for Keadeen’s Second Star To The Right whilst at Coos KC Keadeen’s Blue Boy for Bluesette was BOB and also BOBOH Group 2. Umpqua KC was another triumph for Blue Boy and he again was placed second in the Owner Handler Group. Central Ohio KC was a Best of Breed for Kilkenny’s Across the Universe for Setanta with Daulton’s Rory BOS/BOBOH and Owner Handler Group 4

The “Brains Department” was also working well with a Nosework 2 award for Sullivan Lopez and two sets of news news from Monique that Oliver qualified and earned a third place metallic ribbon in the Excellent Distance nosework class on Saturday at the Performance Scent Dogs trial in Raymond, New Hampshire and he also participated in a Performance Scent Dogs trial  and qualified in the Excellent Distance class for the 10th time.  He came in 2nd place (metallic division) and earned a Bronze Metallic Award for his cumulative efforts.

Congratulations indeed to everybody. You all do us proud!!!

Ollie with this 2nd place

The 2016 World Show may have been in Moscow but Glen of Imaal Terrier people were there. It was a three day event for Terrier folk and a 3 day success for Gleann Bigwig & Pearytail Artless Tess as they got BOB & BOS 3 days out of 3. Meomodo Fantasterrific Arien was Junior World Winner with Pearytail Candy McCoy Best Junior on the other two days.

At Blackpool Young May Moon took Best of Breed with Bendikes Edward Bear at Squiresbeach Best Opposite. Over in America Daulton’s Wild Night of Galore took top spot in Glens at both Mid-Hudson & Shawangunk KC whilst Keadeen Blue Boy for Bluesette did “beauty & brains” par excellence with an Owner Handler Group 3 and obtained his Barn Hunt Q!

As a Breed we aren’t often awarded with Best In Show but we have a new recruit to those hallowed ranks. Kingcottage Boogie on Basil took Best Not Separately Classified, then the Terrier Group and then the ultimate, ultimate finger point for Best In Show at Carmarthen! His photograph was sent but the editorial decision has been made to go with the rosette shot as Beth’s OMG he gave it us face isn’t exactly flattering on her.

Applause for everybody and particularly Basil.

From left to right they get bigger!

Late November but the round up this week is HUGE news. First let’s hear from Laura “Niamh earned her PACH title at the Talcott Mt. agility trial in Springfield, MA today. She is the first Glen of Imaal Terrier to do so. To achieve a PACH – Preferred Agility Champion, she had to earn 20 Double Qs, qualifying in both Standard and Jumpers courses on the same day and 750 points, one point for every second under course time. I’m very proud of her. PACH GCH Niamh of Cnoc CD BN PCD RE MXP5 MXPS MJP5 MJPS PAX MFP T2BP JE RATO CGCA”.

For an incredible, unbelievable third report in one weekend Winston, assisted by Mark, earned his Canine Nose Work (NW2)title with the National Association of Canine Scentwork.

Over in Finland it was a back to back weekend for the Jyvaskyla International. On Saturday it was BOB Gleann Bigwig and BOS Pearytail Artless Tess and Sunday BOB to Gleann Una Noonan with BOS Gleann Bigwig. The Danish Terrier Club also had a double weekend with Saturday seeing Hammersmolles Pandora at the top with Gleann Willie the Whale Best Dog. Sunday saw a reverse of the placings with Pandora going onto get BIS 2 Junior! In Germany My Dear Fellow Bealtaine de Coco took home the Best of Breed rosette.

Over in America Kilkenny’s Granite Aine of Claddagh was BOB at Agathon KC and at Golden Vally it was back to back Best of Breeds for Jeonty Golden Memo.

Many congratulations to everybody!

The Terrier Show had Gleann Una Noonan BOB with the veteran Miimoksen Sirius Best Opposite Sex. The news of the show was the debut of the first American bred Glen to be shown in Finland. Finnabair North American Nebulon flew in (complete with handler) and took Best Puppy and then Puppy Group 3!!!!

The World Show was an American triumph as the US Number One Glen GCH Finnabair Ardmore Ned added a Finnish title to his name with BOB. Pearytail Artless Tess was again Best Opposite with the Veteran titles being awarded to Gleann Nora and Miimoksen Sirius.

Whilst all the mad, frantic showing was going on Mark Brown and Griffin were “working” for a living and earning the last leg for rally novice title.

Many, many congratulations to all.

Thanks for all the photographs-did anybody take anything at Terri-Eri 2014?

The “Swedish Bash” in Eskilstuna had wonderful weather and a fabulous atmosphere is reported. Best of Breed Glen of Imaal Terrier, under judge John Hartigan, was Abberann Fagan with Pearytail Artless Tess Best Bitch. Fagan then went on to take Reserve Best In Show-or Best In Show 2 as it is known in Scandinavia-so an excellent result.

The Irish Sporting Glen Club had a get together and they were also blessed by the weather God. The Quinns are summer holidaying in Ireland and, up to yet, Kirikee Ronan O’Gara has taken 3 Green Stars. Finally Sue Sutton had a smile as big as the sun when her Bailielands Leanbh Orga took the Green Star and Best of Breed at Sligo to make her up to an Irish Champion (subject to IKC confirmation). 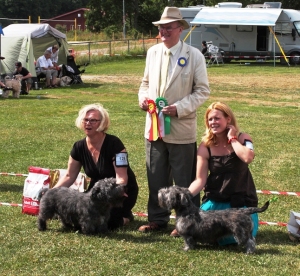 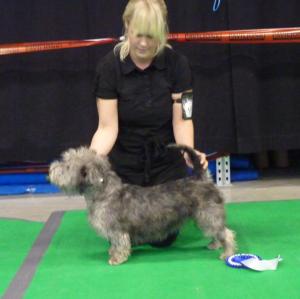