42 Glen of Imaal Terriers may be exhibiting at Crufts at the end of the week but we need to catch up with what has been going on recently. In the USA Finnabair Ardmore Ned took two Group 2s at Greater Fort Myers Dog Club, Abberann Torcan was also a double group placer with a Gp2 & Gp4 in St Louis (guessing the Belle City Winter Classic) and Jeonty Golden Memo was BOB (twice) at Silver Bay Kennel Club. Her sister Jeonty Minnie MeMe was Best Puppy AVNSC and then Group 3 at Newark. Finland saw Pearytail Candy McCoy go BOB at her last Puppy Show and Glenrosedale Ardal Ridire Ain Ri became a Baltic & Lithuanian Champion.

Pride of announcement though has to go to Winston & Griff. Kelli writes that “Winston had a great time with Barn Hunt this weekend earning a first and second place with 2 qualifying legs plus High in class & Griffin spent the weekend chasing the plastic bag for the coursing ability test and he earned 6 qualifying legs towards his coursing ability advanced”. Great action shots by Mark Brown

In Ireland: Ch Abberann Phelan who can now have Multi Champion written in front of his name as his Dutch Championship, to add to his Irish and UK, was confirmed just before Christmas.

The USA haven’t declared officially for the end of the year but provisionally, and here it is interesting as they run two tables one on Group placings and one on breed placings. The Group table has GCH Finnabair Ardmore Ned at number one and the breed table has GCH Emerald Isle Keely with Daulton at the top-she also “manages” number 3 in Group placings also.

Congratulations everybody; a great year for you all!

must go to GCH Finnabair Ardmore Ned who did a great bit of Glen of Imaal Terrier flag flying with 2 Group 2s and a Group 4 in Florida. Not forgetting Finland at the Kotka International Show with BOB & BV to Rosears Ablooming Bud and BOS to Rosears Humpty Dumpty.

Bath Championship Show was rather wet but Glen of Imaal Terrier people were there. Best of Breed, and his 20th CC, was Int Ch Brockland Brayhead Lad with the Bitch CC going to Bregorrey Lady Belleisle. A cluster of shows in Ohio saw 4 Best of Breeds for GCH Finnabair Ardmore Ned plus a Group 4 and 2 Group 3s. Three times his Best Opposite was CH Emerald Isle Sweet Molly Malone with Daulton and once GCH Daulton Emerald Green. Daulton’s Dark Lily of Caradoc was Best Puppy and also nodded into the number 2 slot in the Puppy Group. In the States and owner handled Group is also scheduled (due to the number of professional handlers) and Glens placed in that Group on two days; a group 3 for Paddington of Tipperary and a group 4 for GCH Liberty’s Darren of Daulton.

Ber-D-Mar Ballygriffin of Greystone, not yet 12 months old, finished his Beginners Novice Obedience title and obtained 2 legs towards his Rally Novice Title. Fabulously well done to griffin and “not bad at all” to the other winners over the weekend!!!

South Wales Kennel Association, judged by Peter Bakewell, saw Barney (Ch & Bel Ch Brockland Brayhead Lad) add to his CC & BOB total. Bitch CC went to Winni and as that was her third she can now be known as Champion Winnie Wanna Make Music By Jeonty. Whelped in April 2010 by Johnny Be Good at Romainville out of Jeonty Red Clover she is a first Champion for breeder Linda Samuel and the youngest KC Champion to date. The two Reserves were Jeonty Wanabee Bauer and Jeonty Maybe Daysee 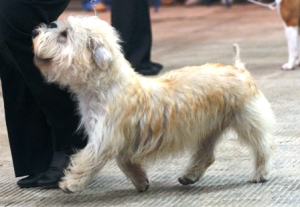 Montgomery weekend was quite a weekend for Curry (GCH Coleraine’s Mandalay Royalty) as she took Best of Breed at all four shows, the first time there has  been a clean sweep in Glen of Imaal Terriers at that event. Fergus (GCH Cill Dara’s Fergus of Daulton) was Best Opposite at Hatboro 1 & 2 and Montgomery. Devon saw newly crowned Champion Finnabair Ardmore Ned (Ch Malsville Soldier Blue/GCH Finnabair Fiona The Wicked) take Best Opposite. A great weekend and many congratulations to all