Half way through the year and the Glen of Imaal Terrier train continues on. At The Glen Association Open Show Best In Show was awarded to Boudivella Osca with Romainville Izzywhizzy Best Bitch and Reserve Best In Show. Best Veteran Kirikee Celtic Warrior with Amhard Off The Cuff Best Puppy. Southern Counties saw Romainville Bilbo Baggins Best of Breed.

Estonian Winners weekend: Gleann Cotton Cody and Gleann Una Noonan took the 2018 title with Cotton Cody Best of Breed. At the Special Terrier Show held there BOB Glen was Madra Athas Ceinlys Chead Ghra, Best Opposite Sex Gleann Indico Indy. The news for Glens though is that Finnabair Broc Rua Arda took Puppy Group 3! In Australia Taufield Queen Of Tara took Runner Up Neuter in Group so she now has her Neuter title

Last week it was easy to decide which Glen of Imaal Terrier should lead the “honour roll” round up and it’s easy this week as well. Please everybody, stand and applaud Billy Tow vom Au Deich who, at the Dutch Championship Show, took Best Dog for the 7th time and Best In Show for the 4th. Oh yes, he was Best Veteran as well. Best Bitch was his kennel mate McJake’s Aivy. Another Veteran Best of Breed was Abberann Conan who added yet another ribbon to his tally at The National. Best Bitch came from the other end of the scale when Jeonty Jyn A New Hope got the nod from Junior. It was worth the trip for the Abberanns as Cosmic Cowboy was Reserve Dog & Reach For The Stars Ryanne Reserve Best Bitch. Best Puppy Amhard Off The Cuff

Nice to hear from Australia where “Neuter” titles are on offer. Taufield Queen of Tara was Runner Up Neuter and Best Neuter at her last two shows which gives her 96 out the 100 points needed. The European Winners in Dortmund saw Jeonty Junior Fire & Ice increasing his reputation with Best of Breed, Fire & Ice Naomi was Best Bitch. In Ireland Daulton’s Midnight Sky of Galore represented Glens in the Group ring. Gleann is an affix that regularly appears here but this week the first mention is from Canada and Dartmouth Kennel Club with a Group 4 and two Group 2s for Gleann Holy Hannah. Crossing the sea to Scandinavia and Jarvenpaa with Gleann Indico Indy as BOB and Gleann Halloween Hattie Best Opposite. Oulu Nordic Show saw Gleann Flatbone Stiubhard with the big ribbon and Gleann Halloween Hattie as Best Bitch. Gleann Ho Ho Hogan was Best of Breed at Seinajoki Group Show.

In America at Ravenna Kennel Club Tipperary That Girl was Best of Breed with Daulton’s Sailor John of Roseglen Best Dog at one show with the results repeated at another but it was G4 for American Girl & BBEG2 for Sailor John. Klanath Dog Fanciers had a back to back set of shows and Keadeen’s Sir Emmet Mingus Glas had a OHG2 and OHG3 whilst Keadeen’s Something Like A Phenomenon was Best Opposite both days but she went one better with a fabulous Puppy Group 1. Finnabair Shorlyne Caatskill Comedy Tonight at Chambersburg KC Shows also registered the Glen in the Group ring with a OHG2 and a G4. 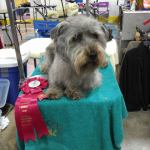 We’ll start off in Europe as usual and what a start in Finland. At Lahti 2 day International Show Gleann Cotton Cody was Best of Breed, Gleann Una Noonan Best Bitch, but then he went onto Group 1 and BIS 4!!! Is there any Glen of Imaal Terrier that has done so well in Europe? Marfidal Devil’s Rock was in Estonia and took BOB there.

Gleann Holy Hannah took a Group 2 in Canada so an excellent weekend for the Gleann kennel!

The UK has Any Variety Not Separately Classified which means all the dogs from the various groups show together. It can be daunting but sometimes Glens can do it as ably illustrated by Jeonty Glynis Making Magic for Zippor who was Best NSC at Oswestry. 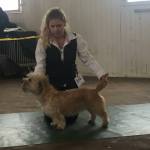 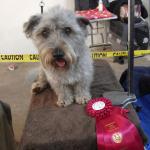 Glen of Imaal Terrier people know that we are a breed that gets better as we get older. Not for us the puppy champ and over the hill by 3 route. Glens are a breed that celebrate getting older and this weekend our senior flag flew tall and proud when Abberann Conan took Best of Breed and Group 4 in his twelfth year at Belfast Show. Best Bitch was his kennel mate Abberann Reach for the Stars Ryanne with Boudivella Osca and Daulton’s Midnight Sky of Galore taking the relevant Reserves with Romainville Rock on Lizzie Best Puppy.

At the Copenhagen Winners Best of Breed was awarded to MacCormac Setna Sithbacc and Pearytail Bonnie B Goode was Best Opposite Sex. Tallin International Show was a wave to the top spot for Gleann Dynamite Mike with Gleann Elite Ellie Best Bitch.

Keadeen’s Second Star to the Right was taking a short break in Montana and annexed two Best of Breeds and a Group 4 and at Butler County KC on day 1 Daulton’s Wild Night of Galore took BOB with Tipperary American Girl Best Bitch with American Girl getting BOB on the second day and OHG2.

A first reporting of an award; who knew that Australia has “Best Neuter” awards? Ch Taufield Queen of Tara was at three shows recently and was awarded Best Runner Up Neuter in all three Groups.

Monique sends the following for the “brains” department-

Ginny had a fun weekend of Scent Work trials! At Saturday’s USCSS (US Canine Scent Sports) event, she earned her titles in both Novice Interior and Novice Vehicle, completing her overall Novice Variable title!  She also qualified in an Intermediate Containers class.  Sunday was a PSD (Performance Scent Dogs) trial and she earned her Novice Exteriors title and a qualifying leg in Advanced Exteriors with 2 seconds to spare.

Congratulations to everybody and it has to be extra applause on behalf of us all for Conan at Belfast.

Keadeen’s Second Star To The Right

Ginny at her scentwork weekend

Abberann Conan at a recent show

The biggie of the results to catch up with has to be Westminster (hopefully the 180 odd who looked on here last Tuesday/Wednesday weren’t too disappointed we were still on Winter break). GCH Finnabair Ardmore Ned made it an incredible three BOBs on the trot so it just has to be one word, besides congratulations, WOW. Best Opposite Sex was his daughter CH Tipperary That Girl. Two Selects were awarded and they were the brother & sister CH Cormac McCarthy & CH Ber-D-Mar My Dream of You Aoife with sire GCH Rainbow Springs Wicklow Warrior of Ber-D-Mar taking the Award of Merit so judge Ron Menaker could certainly see families and more than some may realise. Ned and the dam of the Ber-D-Mar siblings are brother & sister. Ned’s grandsire was the brother of Wicklow Warrior’s grandsire (English bred by a German dog) so besides family we are talking international! Thanks to Jane Fenton for the photographs

Back in January Kathleen O’Donnell (Australia) wrote “Tara (Taufield Queen Of Tara) 6mths first show in Minor got her bitch challenge and BOB then went on to win Minor of group she was so good and stood so well for me she performed well in General Specials (Best in Show) I was so proud of my girl today”. Also in January GCH Kilkenny’s Granite Glen Rooney took BOB/BOBOH and Group 4 at Merrimack Valley KC. The group of shows that make up the Northern Ohio Winter Classic saw two Best of Breeds for Daulton’s Rory & one for Kilkenny’s Granite Aine of Claddagh. At Erie Ch Daulton’s Dark Lily of Caradoc was BOB and then got the nod for Group 3. Two more Group placings for GCH Abberann Torcan, a Gp2 in Minnesota and a Group 4 at Osh Kosh.

The Finns don’t notice Winter so are out and about as usual! A Group 1 for Gleann Dear Dandelion and a Group 1 and BIS4 for Pearytail Cruella de Gleann at Kajaani Puppy Show. At Turkuu International Gleann Cotton Candy was BOB with Stiubhard Cutie Pie at Gleann BOS and obtaining her Finnish Championship. She followed this up with BOB at Parkano Group Show and then took a fabulous Reserve Best In Show. Pearytail Candy McCoy was BOB at Lahti Puppy Show and then went on to Group 3.

In Germany at Chemnitz Fire & Ice Moonraker was twice BOB and at Sporting Terrier of Yorkshire Jeonty Diamond Ring was Best of Breed. In Denmark Gleann Willy the Whale became a Danish Champion. A new Norwegian Champion came into being in MacNallys Glenna-Roisin and at Gent BOB was awarded to Bregorrey Wannabe Victory By Jeonty

The mighty Oliver doesn’t care that it’s Winter as he earned an “Excellent Containers” title at the  Performance Scent Dogs trial in New Hampshire early February.